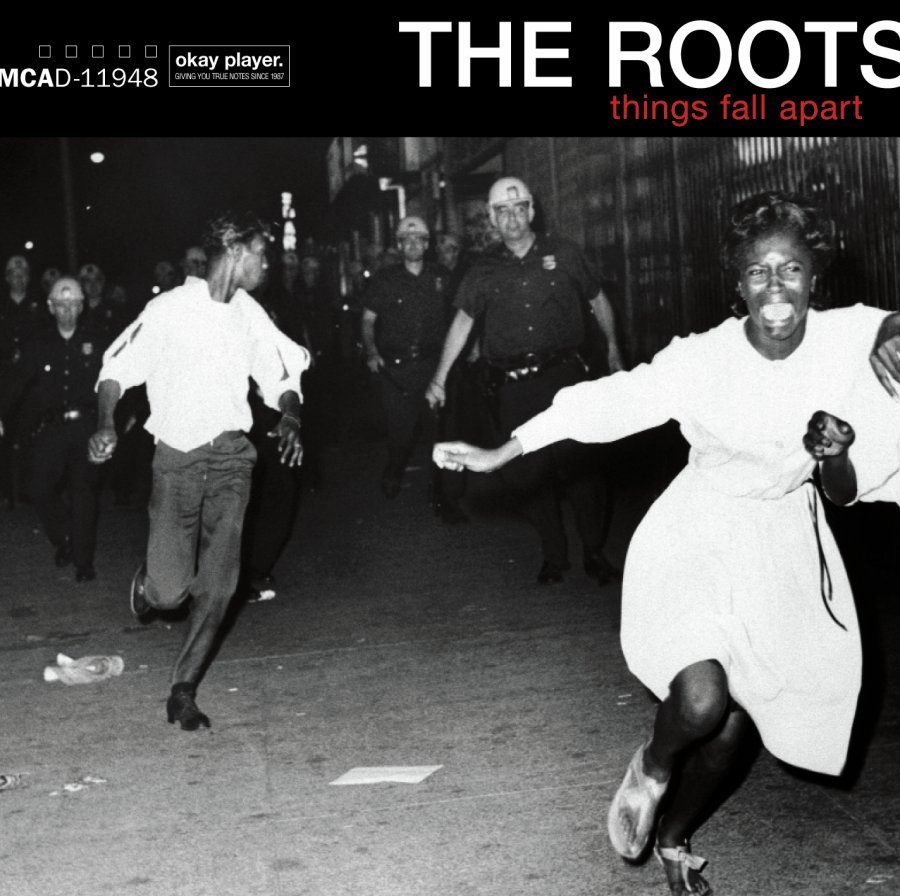 On this day in Hip Hop history, The Roots released their fourth studio album Things Fall Apart. This project is considered by many publications at the Roots “breakthrough” album, gaining them coverage in major publications and expanding their fan base. It also came at a time when the whole Soulquarian collective (D’Angelo, Erykah Badu, Common, The Roots, Talib Kweli, Most Def, and J Dilla) began to come out the gate with hit album after hit album (some titles including Mama’s Gun, Like Water for Chocolates, and Voodoo).

This album was the group’s first project to sell 500,000 copies. The album was eternally stamped at the 2000 Grammy Awards when the album’s hit single You Got Me featuring Erykah Badu and Eve (then known as Eve of Destruction) won Best Rap Performance by a Duo or Group. The album was also nominated for Best Rap Album but was outvoted by Eminem’s The Slim Shady EP, which coincidentally was released the same day.

The album takes its title from the Chinua Achebe novel by the same name. Much like the novel, this album focuses on themes that may seem dismal to some but every day to others. An apparent theme of the album is the uphill battle that people of color, specifically Black Americans, deal with in their day-to-day life. This project synthesized a tone exemplified in Harlem Renaissance era poetry with the street styling specific to Philly rap.

The composition of this album is more than noteworthy. The combination of jazz, swing, soul, and Hip Hop was able to bring the lyrics to life and give each song a full body. The Roots instrumentation on this project is groundbreaking.

The consciousness of this album starts with the cover. The group felt that not one but five covers were best at describing the message they were trying to convey. Each of them represents the result of “things falling apart” throughout the world

1.”Woman Running” by Unknown was shot in Bedford-Stuyvesant projects in Brooklyn and captures two teenagers evading police brutality during a riot in the 1960s.

2.”Ace in Hand” by Bettman was shot on April 15, 1931 and captures an assassinated mob boss in Coney Island, Brooklyn, New York.

3.”The Church Bombing” by Unknown depicts a church that was set ablaze as a for of hate protest against those that worship there.

4.”Baby in the Rubble” by H.S. Wong was shot on August 28th, 1937 shows a child screaming among rumble caused by Japanese warfare.

5.”Crying Child” by Peter Turnley was shot on August 1st, 1992 and shows a Somalian child crying due to their current living situation.

After this album, The Roots went on to celebrate ridiculous success. They released 10 more albums and won two more Grammy’s. Their commercial success has continuous risen over the years. In 2009 The Roots became the official band of Late Night with Jimmy Fallon and when we became the host of The Tonight Show in February 2014 he took them along and made them the house band on that broadcast where they could now be seen every night.