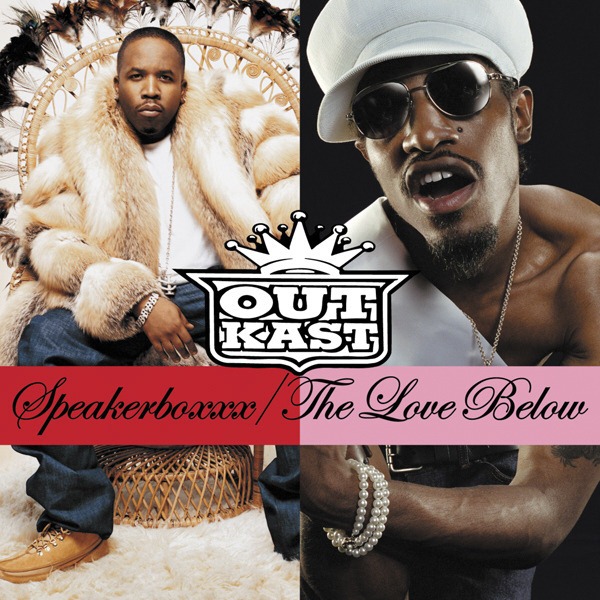 Ever since DJ Jazzy Jeff & The Fresh Prince’s He’s The DJ, I’m The Rapper in 1988 the double LP has become a Hip Hop staple. The sheer volume and intensity or work that goes into such an album has made and broken many a rapper in the past. When executed correctly, the double LP can be a timeless masterpiece, compiling all aspects of the artist into something to be appreciated for all time. On this day in Hip Hop history, OutKast released Speakerboxxx/The Love Below giving the world one of the greatest and most successful double albums recorded.

As second Hip Hop album (and first by males) to be awarded a Grammy for Album of the Year, this project’s accolades speak for themselves. A Billboard Hot 100 #1 hit sat on each of the LPs discs(“The Way You Move” and “Hey Ya”),  11 million copies were sold in the United States alone, and the album appeared on 19 top music charts across the globe. Obviously, this is a special album.

Achievements aside, it is the album itself that sets it so far apart from anything that has come out before it. Essentially, this project is two solo albums crafted independently and packaged together. And unlike any of OutKast’s other work, it allows the fans to distinctly experience Big Boi and Andre 3000’s individual artistry. The two discs have very little in common, much like the surface appearance of the tandem, yet compliment each other perfectly.

Disc one, Speakerboxxx, comes from the mind of Antwon Patton aka Big Boi aka Daddy Fat Sacks aka Lucious Leftfoot and is a spot-on representation of his ice-cold pimpin’. Much to the tone of Southernplayalisticaddilacmuizk, Speakerboxxx took things back to bass knocking, trunk rattlin’ “ghetto muzik” sound that gave OutKast its starts. Tracks like “The Way You Move” and “Ghetto Muzik” are examples of the unique marching band inspired pre-trap Atlanta sound that OutKast created.

Disc two, The Love Below, is Andre 3000 contribution and serves as a cathartic experience from the mind of a hopeless romantic. In contrast to disc one, this album is all the way left pushing Hip Hop’s boundaries nearly to their breaking point. On this album, Dre was in rare form, giving the world a peek at a new side of him. On theme with its title, The Love Below delves into a realm that Hip Hop rarely earnestly approaches, love. Produced completely by Andre, the album’s alternative inspiration allows for a unique style of Hip Hop ballad to be created on almost every track. there is very little actual rapping on this half of the album.

To say Speakerboxxx/The Love Below did a lot for Hip Hop is the wildest of understatements. At a time where the south was only good for club-bangers, OutKast continuously provided introspective depth with their work. This project challenged the standard of subjects that can be rapped about. Andre 3000 single-handled brought a new Prince-like style of androgyny to the rap game, unintentionally paving the way for artists today like Young Thug and Mykki Blanco. Its influence makes this album easily the most important Hip Hop LP to ever come out of the Dirty South.