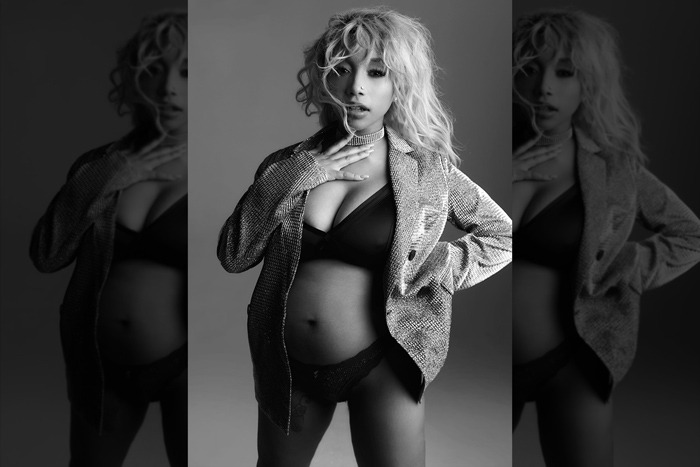 T.I. and Tiny are about to be grandparents.

The couple’s daughter Zonnique Pullins is pregnant with her first child, a baby girl. The father is her boyfriend of two years, rapper Bandhunta Izzy (real name Israel James), according to PEOPLE.

“Literally every year, probably for the past three years, this same rumor [that I was pregnant] had come out,” said Zonnique. “This time I actually am pregnant. It’s weird!”

same as any other day💓🤞🏽

The 24-year-old mom-to-be, who is currently five months along, says she was “kind of sad at first” when she found out she was pregnant.

“I have a million brothers and sisters so I’ve always been the one like, ‘I’m not having a baby anytime soon,’” said Zonnique. “That was always my thing. So I was kind of sad at first, and my boyfriend was really excited from the jump. He was like, ‘You know it’s whatever you want to do.’ ”

“But after a while, I’m like, ‘Now I feel like I can do this. It’s something that will mature me and change me in a great way.’ I’m trying to wrap my head around it, and now we are here.”

Zonnique broke the news to her stepfather T.I. live for the first time during the premiere episode of her new talk show “The Mix.”

“I need another drink,” Tip said after hearing that his stepdaughter was pregnant. “And a joint…and some mushrooms if you got ’em.”

Tip was still in disbelief upon hearing he would be a grandfather. “I ain’t nobody’s granddad,” he said. “I’ve been pops for a long time. I’ll continue to be pops for the rest of my life.”

While Tip is still dealing with the shock, Tiny is excited to become a grandmother. “I can finally say…My baby is having a baby!!” she wrote on Instagram. “I’m getting more excited by the day!!”

Zonnique, who met her boyfriend through Instagram, says she’s going to be “the more strict” parent between the two. “He’s so soft,” she said. “He has two kids already. He’s such a different person with his kids than he is with everybody else. All my friends, even my mom, my parents, my whole family know how I am with my siblings. Like [with my 4-year-old sister] Heiress, I get mad when she’s crying too much. I’m like, ‘Okay, I have to toughen her up.’ So I feel like I’ll definitely be the [more] strict parent out of the both of us.”

I can finally say…My baby is having a baby!! I’m getting more excited by the day!! @zonniquejailee @bandhunta_izzy Congratulations to you both!! I love y’all 👑💙‼️ @IamJamesAnthony #Jamesdrawsandshoots #Babygirlontheway #Zonnique #Izzy #TheMix #TuesdayNight