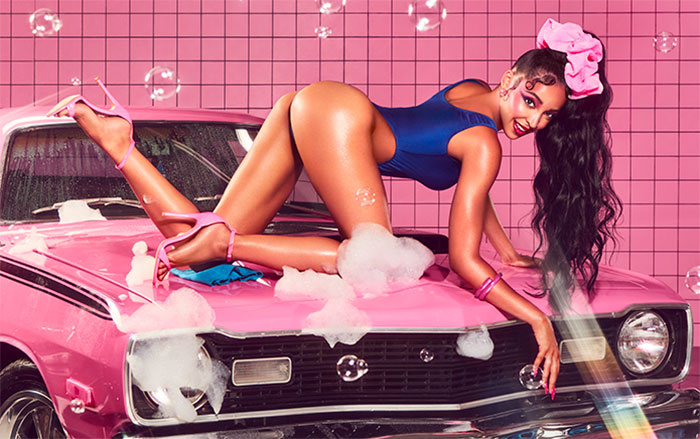 Tinashe is getting candid about her sexuality.

The “Rascal” singer covers the Autumn 2020 issue of GAY TIMES where she opens up about being bisexual. While she has shied away from labeling herself in the past, she is now comfortable enough now to call herself bi.

“It’s not that I don’t like putting a label on it,” she told the U.K. magazine. “But when you say you’re bisexual, a lot of people think… they just have a lack of understanding about what it is. And I tend to shy away from terms—I guess this is the theme of my life—that make people want to categorize me or put me in a box.”

She added, “I don’t like that shit. But—but—I can still give you a general sense of yeah, I’m bisexual. I’m somewhere on the spectrum. You know?”

All hands on deck! @tinashenow is making a splash as our new cover star.⁠ ⁠ As soon as we saw the camp and playful music video for Tinashe’s latest single Rascal, we knew we had to do something spectacular with her. A vintage pink car, Tinashe soda cans, and a 90s-inspired car wash photoshoot later, we think we achieved that and then some. ⁠ As a bisexual woman of colour working in the music industry, Tinashe has faced plenty of testing moments in her career. But she has a fiercely loyal LGBTQ+ following who will always support her. In the brilliant accompanying cover story, Tinashe is candid about her sexuality, the challenges she has faced as an artist and what we can expect from her next.⁠ GAY TIMES Magazine • AUTUMN 2020 • Issue 508⁠ ⁠ Photographer & Art Direction @vijatm⁠ Words @mrnicklevine⁠ Fashion Stylist @bradleykennethstyle⁠ Fashion Assistant @alyxsc Hair : @clydehairgod at Forward Artists using Oribe ghdnorthamerica⁠ Makeup: @adamburrell using Fenty Beauty for The Only Agency⁠ Nails @nails_by_yoko⁠ Production Designer @213annie_sperling⁠ Studio @electricponystudios⁠ Retouching @lucaszalmas⁠ Producer Leah Blewitt #leahblewitt⁠ ⁠ Available worldwide now at the link in our bio!⁠

She continued, “I never wanted people to think that I used it for attention. There are so many fucking stereotypes about being bisexual that made me want to shy away from talking about it. I’m much more open to having those discussions now.”

This is not the first time Tinashe has spoken about being a part of the LGBTQ+ community. In 2011, the “2 On” singer tweeted about how she likes both boys and girls.

“I like boys. and I like girls. I just got so much love love loveeeeee to give #sueme,” tweeted Nashe.

I like boys. and I like girls. I just got so much love love loveeeeee to give #sueme

According to Pride.com, she also addressed the topic in a since-deleted Tumblr post in 2012. “I don’t necessarily want to put a title on it, ’cause as soon as you put a title on it, people, you know, put it into a category where it has to be 50/50,” she wrote. “But I definitely know that I have an attraction to everyone and I love everybody.”