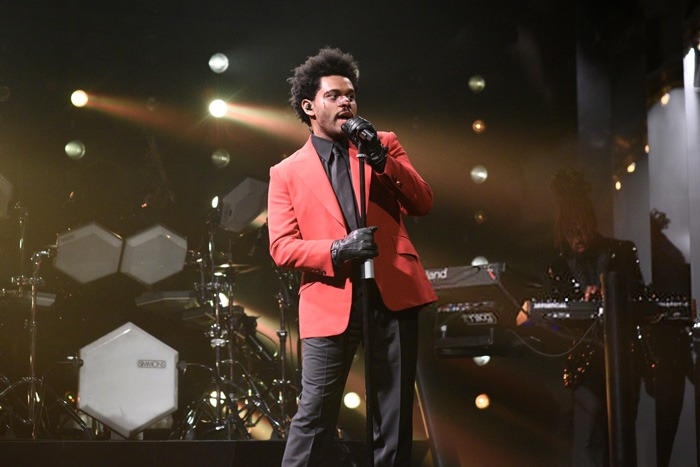 The Weeknd returned to “SNL” for a third time.

The XO crooner took over Studio 8H for the first time since 2016 to perform a pair of tracks off his upcoming album After Hours on the Daniel Craig-hosted episode. For his first performance, he delivered his hit single “Blinding Lights” on a mirrored stage, dressed in his now signature red blazer with bloodied and bandaged nose.

He returned later in the episode to debut a brand new track called “Scared to Live” featuring Oneohtrix Point Never’s Daniel Lopatin, who composed the score to Uncut Gems. The performance featured synths reminiscent of those used in the Safdie Brothers film in which The Weeknd made his acting debut alongside Adam Sandler.

“Well, I am not the man I used to be / Did some things I couldn’t let you see / Refused to be the one to taint your heart,” sings Abel on the R&B ballad, which features a sample of Elton John’s “Your Song.”

Additionally, The Weeknd joined “SNL’s” Kenan Thompson and Chris Redd for a hilarious musical sketch about men sleeping “On the Couch” instead of in bed with their lovers. He also returned for a brief “Weekend Update” segment, dubbed “TheWeeknd Update.”

The “SNL” appearance comes ahead of his highly-anticipated album After Hours, which is set for release on March 20. The Weeknd will hit the road on his “After Hours Tour,” starting June 11 in Vancouver.