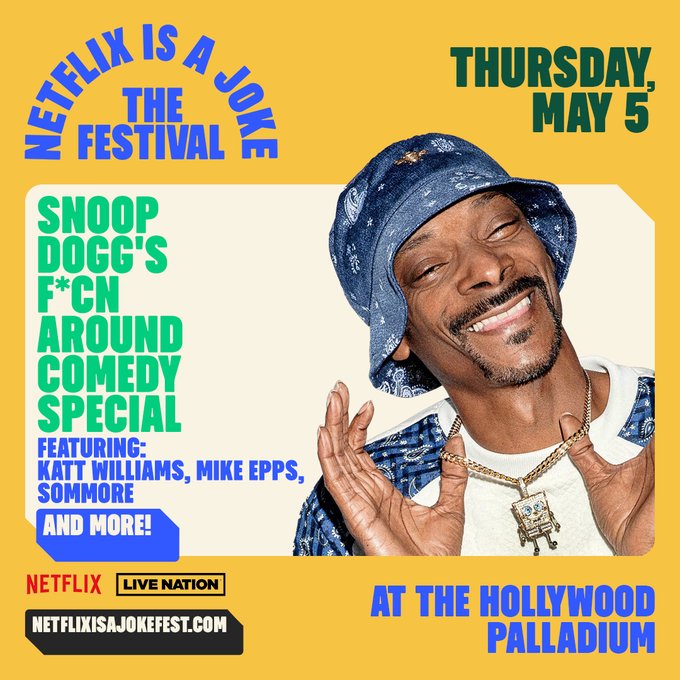 Over the years, Snoop Dogg has proven to be Hollywood’s biggest hustlers. From rapping to acting or even hosting, Snoop D.O double is always working, and as expected, the California entertainer just landed another gig.

The Netflix Is A Joke Festival recently expanded its line up and Snoop Dogg’s F*cn Around Comedy Special made the cut. Billed by Netflix as “a night of legendary black comics,” a live taping of Snoop Dogg’s special will take place May 5 at the Hollywood Palladium. Katt Williams, Mike Epps, Sommore, and more are all set to join him.

This will be the first time the film streaming hosted a platform live comedy festival.

Netflix Is a Joke: The Festival begins April 28 and runs through May 8 in Los Angeles. Along with Snoop Dogg, Netflix added John Mulaney, and Bill Burr.

Again Snoop’s comedy special will take place on May 5 at the Hollywood Palladium.

Mulaney will first perform John Mulaney: From Scratch with Special Guest Earthquake at The Forum on May 3 and again at Hollywood Bowl on May 7, and Burr will perform two shows for Bill Burr & Friends at Hollywood Palladium, both on May 4.

Other new additions to the 11-day comedy event include Dana Carvey, David Spade, Sasheer Zamata, Sebastian Maniscalco, Franco Escamilla, and the stars of Cobra Kai and Never Have I Ever. The festival comprises more than 250 live shows, be spread across 30 Los Angeles venues between April 27 and May 7.