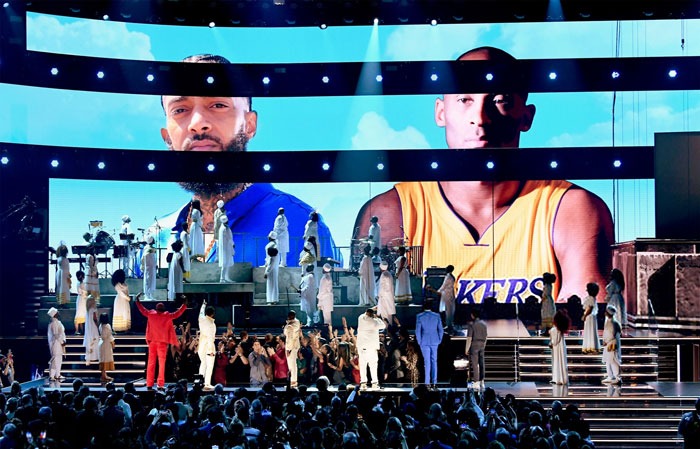 The Grammys honored Nipsey Hussle with a star-studded salute at Sunday’s show. Some of Nipsey’s closest friends and collaborators took the stage at L.A.’s Staples Center, where his memorial was held last year, for a powerful performance.

Meek Mill kicked things off. Wearing a blue suit in honor of Nip, he performed a new Nipsey-inspired verse before Roddy Ricch delivered some rap-sung bars. DJ Khaled then took things “Higher” with help from John Legend and Kirk Franklin while performing a rousing rendition of their Grammy-winning hit with a gospel choir. YG emerged in a red suit to celebrate his Crenshaw brother.

The performance capped off with a photo of Nipsey and Kobe Bryant side by side on the giant screens. “Long live Nip. Long live Kobe. The Marathon continues,” said Khaled as Nipsey’s family including Lauren London stood in the crowd.

Nipsey posthumously won his first two Grammys for Best Rap Performance for “Racks in the Middle” with Roddy Ricch and Hit-Boy and Best Rap/Sung Collaboration for “Higher,” which he shared with DJ Khaled and John Legend.

“This is for Nipsey Hussle. This is for hip-hop,” said Khaled, who also announced his newborn son’s name, Alealam.