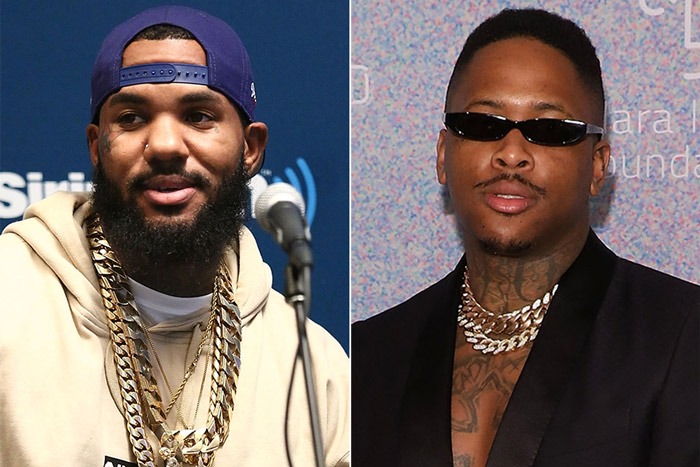 YG was arrested at his home Friday on robbery charges.

The Game for one was outraged by the arrest of his fellow Compton MC, which came just days before the Grammys where YG is set to perform during a tribute to Nipsey Hussle.

“They know that YG was supposed to be on the Grammys,” Game told TMZ. “The Grammys gave ni**as an opportunity to put on for Nip and of course the LAPD, they gon’ come through and hate. Wake a man up after he been through everything he been through at 4 a.m. in the morning taking him to jail when he excelling in life. That shit trash.”

Funny how @YG gets arrested the weekend of the Grammy’s when he’s supposed to hit the stage in Nip’s honor. #LAPDtheBiggestGangHere

He says that YG was targeted because cops wanted to derail his Nipsey tribute. “People knocking on doors taking this man away from his kid during a celebratory weekend for Nip,” he added.

YG was taken into custody on Friday morning after L.A. County Sheriff’s Deputies arrived at his home with a search warrant related to an on-going criminal investigation involving a robbery. He was released Friday night on $250,000 bail and is expected to appear in court on Jan. 28.

The “Big Bank” rapper is slated to perform alongside John Legend, DJ Khaled, Meek Mill, Roddy Ricch, and Kirk Franklin as part of a tribute to Nipsey Hussle at the 62nd annual Grammy Awards on Sunday.