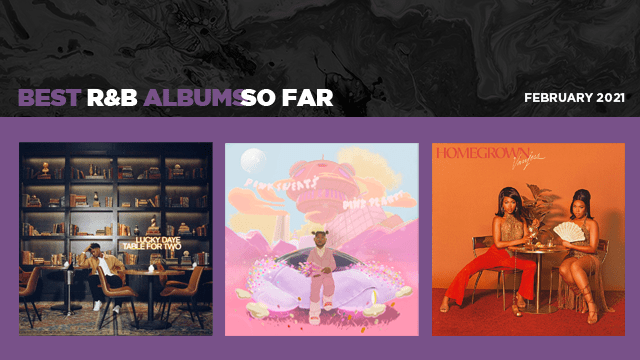 2020 was a chaotic year and thankfully we made it to 2021. While the start of the year has been relatively quiet musically, there are a couple albums that stood out from the rest. Welcome to PINK PLANET, a celestial body soundtracked with lush samples, ethereal guitar solos and the silky tones of Pink Sweat$. The 29-year-old Philadelphia-born singer demonstrates his love for classic R&B and its roots in funk and blues music. Aside from the Kehlani-assisted “At My Worst,” Sweat$ handles the 18-track album entirely alone. It’s a bold (and rare) choice for an artist to tackle their debut project solo, but his decision shows the unbridled confidence carried by the burgeoning artist and his voice easily fills the 48-minute listen.

A play through PINK PLANET equates to a walk through time. “PINK CITY” sounds like a powerhouse radio anthem from the mid 2000s. “Paradise,” could be from Jodeci’s discography, while tracks such as “Icy” and “Not Alright” are faster and more lively, carrying  disco-inspired breakbeats. Void of filler and fluff, PINK PLANET is a massive achievement from Sweat$, an artist we expect to be around for the foreseeable future. Following the success of his first full-length solo album Painted, Lucky Daye returns with a new offering to kickstart 2021.Besides the intro, the 7-track project includes a feature on each song. Assembling a cast of some of R&B’s brightest young stars, from Ari Lennox to Mahalia, Daye acts like an R&B version of DJ Khaled on Table For Two (but rather than the occasional screaming over the intro of a track, instead Daye provides silky smooth vocals and emotionally charged verses). After beginning his career as a songwriter and background vocalist, the New Orleans-bred singer isn’t afraid to take a back seat vocally on his own songs, allowing his featured guests the opportunity to shine at their brightest. The interlude on “How Much Can A Heart Take” is both comedic and poetic, referencing the complexities that the social media age brings to a romantic relationship. Although the project is satisfying, it may leave some fans looking forward to his next full length release. The era of sister duos taking over R&B is upon us. Chloe x Halle have already proven they have all the tools to shape the future of the genre for years, but for a more nostalgic approach, in comes Ivanna and Jessica Nwokike, b.k.a.VanJess to provide the classic sound of 90s R&B mixed with upbeat electronica. After Bryson Tiller will’d his 2020 Anniversary album into the top five of the Billboard 200 last September, the Kentucky-bred vocalist kept his foot on the gas — contrary to his movements post release of his chart-topping True To Self album. An image defining move illustrated by his reflective and sentimental Anniversary Deluxe edition. Though the updated tracklist only includes four new additions, the weight of their sonic value has proven to be visceral — with songs like “Still Yours” featuring Big Sean striking tender chords with audience across multiple social media platforms. Tiller also resurrects his “Pen Griffey” sonic tendencies of yester-year over the subdued kicks and 808-drum snapping production of tracks like “Losing Focus” and “7:00.” Jazmine Sullivan doesn’t even need to hit those booming notes to make powerful R&B. Sure, she can do that too. But her voice, so textured with a rich personality, makes even the most banal notes stars of the show. Sullivan has been a mainstay of R&B since her wildly successful 2008 album Fearless, which netted her a Billboard 200 Top 10 chart entry and scores of Grammy nominations. On Heux Tales, Sullivan has adapted to the times, recruiting H.E.R., Ari Lennox and the funky, MC/drummer Anderson .Paak. Digging into her deep bag of melodies and harmonies, Sullivan succeeded in releasing a rock-solid project that holds up exceptionally well in her stacked discography. Arlo Parks began her career as a poet in South London and the skills she amassed are still present in her music today. Parks has been dropping music since 2018, but began to catch fire with “Black Dog,” a monumental, heartbreaking single that hinted at the wealth of talent Parks had to offer. She’s in full control of her music, manipulating words into different shapes and sounds with ease. Collapsed In Sunbeams satisfies all expectations and certifies that Parks is one of the best living R&B songwriters.