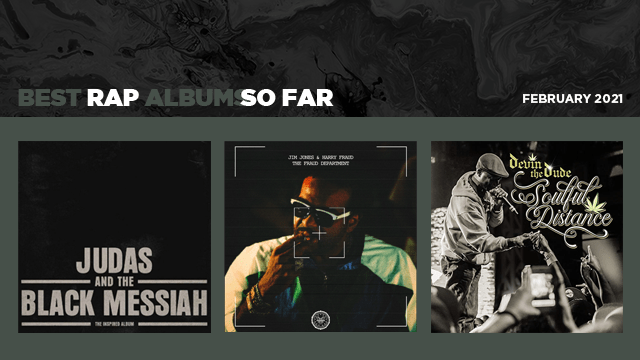 2020 was a chaotic year and thankfully we made it to 2021. While the start of the year has been relatively quiet musically, there are a few albums that stood out from the rest.

Judas and the Black Messiah: The Inspired Album – Various Artists With polarizing collaborations such as Nipsey Hussle’s posthumous connection with JAY-Z on “What It Feels Like” and the homage-paying link up between reigning 2020 DX Hip Hop Awards Producer Of The Year champion Hit-Boy and Hip Hop vet Nas via “EPMD,” Judas and the Black Messiah: The Inspired By Album delivers a staggering blow of pure lyricism and superb production — all unified under the premise of portraying the story of Black liberation, lead by one of the most profound Civil Rights leaders of all time.

Comprised of an elite and diverse cast such as A$AP Rocky, Pooh Shiesty, Polo G, G Herbo, Smino, Dom Kennedy and more, this project represents an amplified sonic celebration of Black History Month across all 22-tracks. Devin The Dude is proof incredible consistency can keep one relevant as a rapper for as many years as one should decide to open the notebook and let the pen glide. With a career spanning over three decades, Houston’s stoner rap pioneer continues his run unchecked, even amid a pandemic. His new album, Social Distance, sees Devin ruminating over the world’s current circumstances, rap music and his matured view on love in his signature laid-back smooth style.

Over the course of 51 minutes, the 50-year-old everyman MC evokes the image of him sitting in the studio with a blunt in hand, sipping on some Moët as he catches people up on what’s been going on in the life of your favorite rapper’s favorite rapper. Whether he’s slinging relationship advice on “A Good Woman” or life guidance alongside fellow southern legends Slim Thug and Scarface on “Live And Let Live,” Devin’s relaxed delivery reigns supreme. Eleven albums later, he’s still cooler than a freshly rolled swisher sweet.

Man On The Moon III: The Chosen — Kid Cudi Twelve years after it began, Kid Cudi’s intergalatic saga has come to a close, with Man On The Moon 3: The Chosen. On his latest, we find the godfather of psychedelic rap in a better state than the previous two chapters of the trilogy. Previously, Cudder was a notoriously tortured soul, fighting battles with his demons, armed with hums and groovy rap melodies. But on The Chosen, Cudi seems more in control. His demons are still present, but he handles them with grace instead of despair. With a familiar producer team from the previous MOTM albums, of Dot Da Genius, Plain Pat, and Mike Dean, The Chosen is a cohesive extension of the Cleveland-born rapper’s previous work. There’s also some fresh blood and new collaborators, including Finneas from Billie Eilish fame, singer Phoebe Bridgers and producer duo Take a Daytrip. There’s some misses (Pop Smoke sounds wildly out of place on “Show Out”) but it’s overall an excellent end to one of rap’s most iconic storylines. Nothing makes us happier than seeing Lil Durk succeed in a year where all the odds were stacked against him. He lost his dear friend and frequent collaborator in King Von last November, and channeled that pain into The Voice, Durkio’s sixth studio album which peaked at the second spot on the Billboard Top 200, marking the Chi-town rapper’s third top ten project. One of the more melodic founders of Drill Rap, The Voice is packed-full of effortless hooks and catchy melodies. “Stay Down” featuring 6LACK and Young Thug is one of the standout tracks from the project, a moody hit by three artists who work incredibly well together. But The Voice is truly a dedication to Von, and Durk shines when memorializing his fallen friend on “Death Ain’t Easy” and other heartbreaking but stunning tracks.

Proud Of Me Now — Sheff G Since Canarsie-rapper Pop Smoke’s passing in February of 2019, Brooklyn Drill rap found itself in a precarious position. The roots were strong with Fivio Foreign, 22Gz, Sleepy Hallow and Sheff G, but there were vulturous newcomers aiming to make a quick buck off the hype Pop and the BK Drill founders had started. Artists such as CJ, Quelly Woo and other copycats have swarmed to the scene, scraping together what’s left. That’s why Proud Of Me Know, the latest from Sheff G, is so compelling. It’s a bite-sized and highly focused album that strays away from comparisons to the Big Woo xand shows that Sheff has a big, booming voice of his own. The aggressive “No Negotiations” and more introspective “Mistakes” suggests that Sheff might be ready for the crown of the Five Boroughs. It would be easy to label Song Of Sage: Post Panic!, the latest album from LA-based rapper Navy Blue, as an extension of Earl Sweatshirt. But that would entail overlooking the vast differences between the two artists. Where Earl leans towards fractured narratives and abstract expression, Navy Blue is more concerned with storytelling, and presenting chronology through a deeply impassioned and personal lens. Navy Blue, born Sage Elsesser, self-produced a handful of the orchestral beats on Song Of Sage. Though he also recruited rappers Maxo, billy woods and the legendary Mos Def, Song Of Sage is primarily handled alone, a fitting approach given the intimate subject matter of personal history, self-identity and pride.

Music To Be Murdered By: Side B — Eminem Say whatever you want about Eminem: the man pushes weight. Nearly a year after Music To Be Murdered By first released, Em dropped Side B, a deluxe edition which features sixteen new tracks. In typical Slim Shady fashion, Side B released without warning, and featured new contributions from old friends, including Skylar Grey and Dr. Dre, but also some new faces in the Eminem universe like Ty Dolla $ign. The shock drop spread like wildfire, selling nearly 100,000 units in its first release, and helped to propel the album back to the third slot in Billboard’s Top 200 chart. Em might be pushing 50-years-old, but it seems he’s as nimble as ever.

That’s What They All Say — Jack Harlow If anything, Jack Harlow’s debut album That’s What They All Say proves he is worthy of the hype and chatter surrounding him. Following his Billboard Hot 100 Chart-topping hit “What’s Poppin” remix featuring DaBaby, Lil Wayne and Tory Lanez earning him a Grammy nomination for Best Rap Performance last November, the Generation Now rap star had a lot to live up to. Jack delivered, though, in December and remained steadfast in keeping up with his feverish hit-making pace and promptly secured the No. 5 spot on the Billboard 200 Chart. With deep cuts like “Luv Is Dro” which taps late R&B vocalist Static Major and fellow Kentucky native Bryson Tiller, combined with viral hits like “Tyler Herro” and “Way Out,” the album is as sound divers as it is well-kempt lyrically. The most convincing part of all, though, is Jack Harlow’s consistent prowess throughout That’s What They All Say — which is seemingly a master class on the execution of a multi-producer project as it’s laced with production from Scott Storch, Hit-Boy, Boi-1da, Harry Fraud and numerous others.