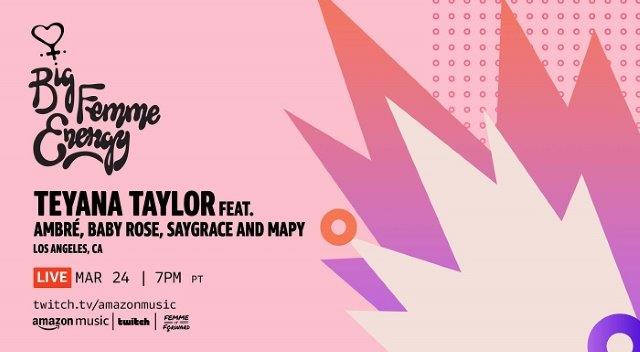 Teyana Taylor, an artist, actress, and dancer, will perform live as a special guest during the forthcoming “Big Femme Energy Live” performance on March 24 for one night only, according to Amazon Music and Femme It Forward. Fans may watch live performances by Teyana Taylor, Ambré, Baby Rose, SAYGRACE, and Mapy, who will be accompanied by an all-women symphony orchestra. The one-of-a-kind concert, which will be live-streamed from Los Angeles’ Belasco Theater exclusively on the Amazon Music channel on Twitch starting at 7 p.m. PST, is the final stop on the “Big Femme Energy Live” tour.

“Sometimes we gotta take the time to smell our Roses even after the Last Petal falls. I can’t imagine a better way to close out Women’s History month than by celebrating with a group of phenomenal female artists and musicians to showcase our gifts together in this event to honor women around the world,” said Teyana Taylor.

“With March being the time of year when people celebrate women’s contributions to society, we decided that now would be a great time to release The Making of Big Femme Energy. While creating the album, it became evident that we, as women, make up the fabric of the entertainment industry. However, when it comes down to owning and distributing works of art, we oftentimes face barriers that our male counterparts do not,” said Heather Lowery, president and CEO of Femme It Forward. “Viewers will get a firsthand look into the blood, sweat, and many tears that went into making something seemingly as simple as an all-women compilation album. Our hope is that after viewing the film and tuning into the Big Femme Energy Live experience on March 24 with Amazon Music, we’ll move beyond just celebrating women once a year and truly start to recognize the benefits that we provide to the industry through our dedication, hard work, and creativity on a daily basis.”

The Making of Big Femme Energy, a 15-minute documentary launching on Amazon Music on March 29 and includes artist interviews and behind-the-scenes footage describing how the Big Femme Energy compilation album and tour came together, will take fans even deeper.

Heather Lowery, President and CEO of Femme It Forward, will also host a special Women’s History Month edition of Amazon Music’s “Group Thread” on March 28. She’ll be joined by special guests as they discuss the concert, the evolution of Big Femme Energy Vol. 1, and even tease an upcoming look at Vol. 2. Group Thread will premiere exclusively on the Amazon Music Twitch Channel on March 28 at 6 p.m. PST.