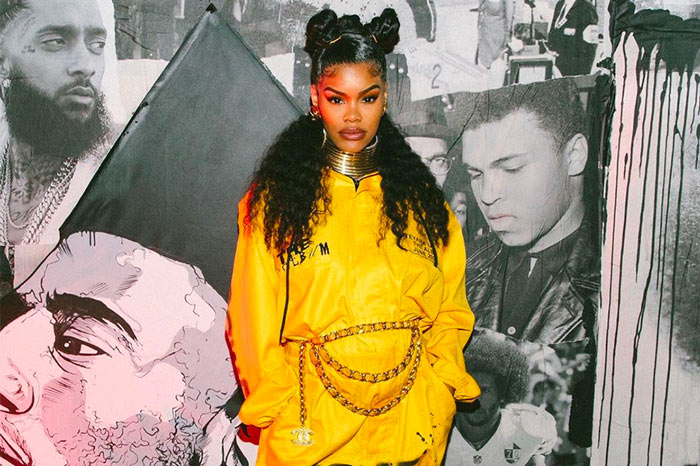 Teyana Taylor is delivering her second child with some help from Erykah Badu.

The pregnant songstress revealed that she plans to give birth to her daughter at home with the Grammy-winning soul singer serving as midwife. Teyana made the revelation while speaking with Nick Cannon on his Power 106 morning show, “Nick Cannon Radio.”

“I’m considering home birth and I’m actually gonna be doing it with Erykah,” shared Teyana. “They’re gonna deliver my baby. I’m super excited, so I’ma have her just sing her verse from ‘Lowkey’ for me. That will calm my nerves.”

“Lowkey” is Teyana’s collaboration with Badu off her new project, The Album. She said she was nervous to even approach her idol about the collaboration. “I have to brag about this because I’m very excited about this. Erykah’s not just giving anybody features, and rightfully so,” Teyana told Apple Music. “I get the chills every time I hear her on this track because it took me three months to ask her. That’s how scared I was. I was prepared for her to say no.”

As for Badu, she has been moonlighting for years as a certified doula. “I’ve always had a mothering nature. But I didn’t plan on becoming a doula. I just wanted to care for my family and friends,” she told PEOPLE. “When I saw the baby, I cried. I knew what I was supposed to do with my life.”

This won’t be the first home birth for Teyana. She previously gave birth to her first daughter, Junie, in her bathroom with just her husband, Iman Shumpert. The baby arrived earlier than expected and they were unable to get to the hospital in time. “She came out as a wonderful surprise to everyone! Not knowing I was in labor until I felt her head,” said Teyana. “It took two ten count pushes with my fiancé playing Dr and she entered this world into his bare hands!”

Earlier this month, Teyana and Iman announced that they were expecting their second child. The baby girl is due in September.