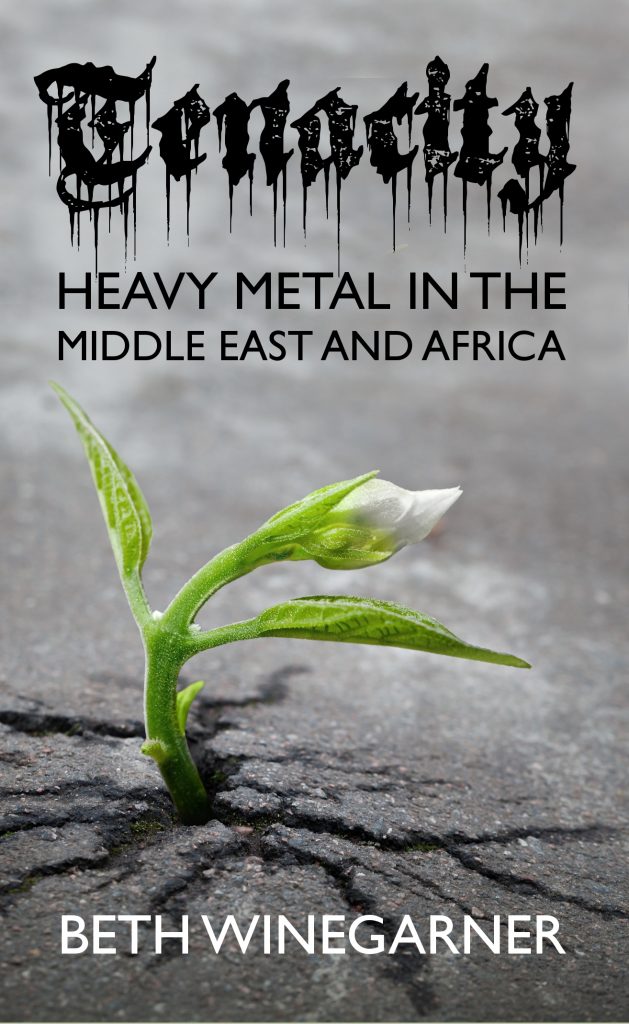 If you’ve ever wondered how a music genre that often gets bad press in the West can develop in other regions of the world, veteran journalist and author Beth Winegarner’s new book Tenacity will tell you.  She shines a light on Middle Eastern and African metal scenes in several pieces, including an exclusive interview with Syrian filmmaker and musician Monzer Darwish following the release of his documentary Syrian Metal is War. Women and men in Morocco, Egypt, Lebanon, South Africa talk about their metalhead life struggles. It can feel very far, or very close as everybody is a misfit to someone else, but mostly these stories tell us about artistic freedom and courage. The author adds “I want to acknowledge that, as a white Westerner, I am writing about cultures and history that are not my own, and doing so from a perspective of safety and privilege. For the most part, I have tried to be a conduit for these musicians and fans to tell their own stories. They deserve to have their voices and music heard, and they also deserve safety, prosperity, and hope.”

Beth, how did you get the idea to put together this collection, and have these articles been published before?
Yes, it’s mostly previously published work, written between 2011 and 2018. The pieces ran in a variety of places, including the New Yorker, Bitch, PopMatters… The only new one is the final piece, about Monzer Darwish and the Syrian metal scene. This is a subject I kept coming back to, partly out of my own curiosity, and partly because as I got to know bands in the Middle East and Africa, they would tip me off to something else interesting going on there. The piece about the Egyptian metalheads who were falsely arrested and accused of being black bloc protesters came from a tip I got from Bassem Deaibess of Blaakyum, who’d heard about it from someone else. At some point, I realized I’d amassed quite a few pieces that were loosely related, geographically, thematically or both, and I thought it would be nice for people to be able to read them all in one place.

Will you keep on growing this collection?
I’m not really sure. If something else comes up that’s interesting to me, I might write about it, but I don’t have any solid plans either way.

From these interviews and your research, how do you see metal develop in these regions?
I don’t really have any predictions for metal scenes in the Middle East and Africa. I’m not close enough to them, nor do I understand the political situations where they are, well enough to really say. I know that musicians and fans are often quite hopeful -and tenacious!- but they are also realistic, and they are dealing with the trauma of war, violence… Even asking them what the future holds, their responses are quite mixed.

Do you think metal can help individuals or societies being more accepting?
I think metalheads in morally restrictive regions have a tough time finding acceptance among mainstream society – in many ways that’s what attracts people to heavy metal in the first place. They already feel outside the mainstream, and metal offers a subculture that’s an alternative to the mainstream. In many ways, it really isn’t that alternative to the mainstream, at least not here in the West, but that’s a big topic and not something I can get into easily.

On the other hand, I do think that metalheads in the West are more likely to feel empathy and compassion for other metalheads, whether they’re Muslim or Christian or agnostic, Iranian or Egyptian or Botswanan. Humans behave in very tribe-like ways and we often don’t make enough effort to understand people who are different from ourselves. But if we find that we have something in common — like, say, a love of heavy metal — that can sometimes bridge the gap and make us more willing to understand and welcome people we would otherwise perceive as different. I think this goes both ways; I have friends in Lebanon who probably would otherwise dismiss me as a rude American Trump supporter, but because we share a love of music, they’ve gotten to know me well enough to recognize I’m not like that.

What do you wish for the metal scenes in these regions and beyond?
Mostly, I hope they are able to continue to make and perform music, to gather fans together safely, to share community together. And that they get more opportunities to tell their stories.

About yourself, how does metal influence your lifestyle, friendships, work…?
I’m old enough now -I’m in my mid-40s- that it isn’t really a dominating factor in my life. Other things are more dominant: work, family, political worries… But I still do write about heavy metal pretty often, both for other publications and on my blog, and a number of my friends are fellow metal fans, or especially fellow metal scribes. And I still try to go to shows as often as I can.

When did you discover metal, has it shaped you from a young age?
I grew up in a rural part of Northern California, and we didn’t get MTV until 1987 or 1988 when we started to be able to get any cable channels at all. It was around that time that metal was starting to get big, and MTV had shows like Headbanger’s Ball and the Hard 60. It was all radio-friendly stuff like Skid Row, King’s X, Living Colour, Guns N’ Roses… I had been a music fan for a long time already, but nothing had made me feel as good and as in touch with my feelings as those metal bands did. I’ve loved the music in various forms ever since, and it’s been awesome, with the advent of online music, to see heavy metal diversify – there are so many genres now, and even small niche bands can find an audience online through services like Bandcamp. I’m sure the music has shaped me in some ways, but it’s hard to put my finger on exactly how. Mostly, I just listen to it because it makes me happy.

And what are your personal metal regrets or dreams?
Hmm. I’m sad that I didn’t get to see Black Sabbath as a young band in the early 1970s, or Metallica with Cliff Burton. But for the most part, I’m pretty lucky. I live in San Francisco, and most metal bands come through here sooner or later.

Make sure to check out the soundtrack of the book, a curated playlist of the featured musicians; learn more about Beth Winegarner and get your Tenacity e-copy or print book HERE.  A portion of the proceeds will go toward Syrian Eyes, a nonprofit in Lebanon that provides shelter and aid to Syrian refugees.