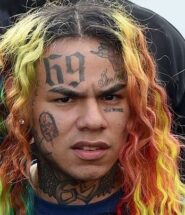 Tekashi 6ix9ine is reportedly facing a lawsuit from the victim of his 2015 sexual assault case.

TMZ reported Tuesday (October 20) that the then-13-year-old has filed against the polarizing rapper as well as his cohort Tay Milly under Jane Doe. In the docs, she states she was under the influence of drugs and alcohol at the time the sexually explicit videos were recorded and unable to consent to the activities taking place. She’s suing for child sexual assault, child sexual abuse and infliction of emotional distress.

For his part in the series of three videos, 6ix9ine pled guilty to use of a child in a sexual performance in October 2015 and in October 2018, was finally sentenced to four years probation and 1,000 hours of community service.

According to the lawsuit, the first video features the victim performing oral sex on Milly as 6ix9ine slaps her butt and dry-humps her from behind. In the second, she allegedly sat on 6ix9ine’s lap in her undergarments and in the third, she was laying naked across both men’s laps as Milly groped her.

The suit comes just after 6ix9ine settled a lawsuit with a blind fan who sued him over the lack of access to his website. Yony Sosa filed a class-action suit against the Brooklyn rapper saying he violated the Americans With Disabilities Act for failure to provide a visually impaired individual access to purchase the items he was selling on his site.