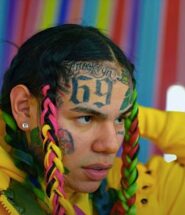 Tekashi 6ix9ine has recused himself from social media in the wake of his TattleTales album falling well below projections. In that time spent away from trolling and antics committed on Twitter and Instagram,  he’s reportedly reached a settlement with a blind man who sued him over the lack of access to his website.

The man, Yony Sosa, attempted to purchase merchandise on 6ix9ine’s online store but stated “multiple access barriers” kept him from having the same experience as a fan with sight.

Sosa chose to file a class-action lawsuit against 6ix9ine, claiming the Brooklyn rapper violated the Americans With Disabilities Act for failure to provide a visually impaired individual access to purchase goods on the site.

The lawsuit was reportedly settled this week but with one stipulation attached: 6ix9ine has to complete the terms of the settlement by October 17 or Sosa could drag the case back into court and have him sanctioned.