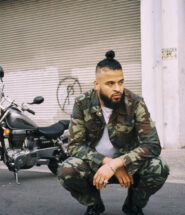 In 2015, he moved to LA to pursue music full time. After connecting with Charlie Heat, the two established a creative relationship which allowed TDot to release his hit single, ‘Take Me Under’ later that year. Soon after the release, TDot’s music caught the attention of song-writer Makeeba Riddick and from there his career sky-rocketed leading to us at HipHopSince87 championing him early in his career.

Fast forward, TDot drops off his new single “Sky Is Falling” — premiered here with us first. This latest single along with his August release, “Ghetto Lullaby,” are found on his forthcoming project, Dopamine Damage, written and recorded in the early stages of Quarantine. The forthcoming project is a commentary on our current society, across the backdrop of economic, social and political unrest. It is an observation of a moment when the world stopped and all things determining clout and status were stripped away. Based on Tdot’s track record of hits, it is unlikely that he will disappoint with this one.