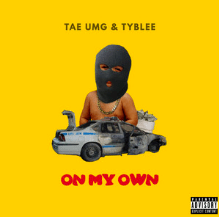 Rapper-songwriter Tae UMG just dropped his latest project, a fiery new music video titled “On My Own.” He joined forces with skilled emcee Tyblee, and the visuals are directed by Remrod.

Inspired by many Hip-Hop icons, Tae UMG is a rapper who has surely found and created his own lane in the genre, as he crafts a unique signature sound easily recognizable at first listen.

Top notch lyrical abilities and a rare versatility are the elements that work in favor of “On My Own” ‘s coming success, thanks to both rappers delivering their A game throughout the track, both sonically and on-screen.

Their undeniable chemistry displays a full groovy swag, with a kind of music that impactfully reflects the many experiences they went through while fighting their way to the top, layered over a soundtrack filled with great beat selections and catchy hooks that keeps the listener engaged from start to finish.

“On My Own” is the perfect joint to trigger people’s attention and gain a massive following base in no time.