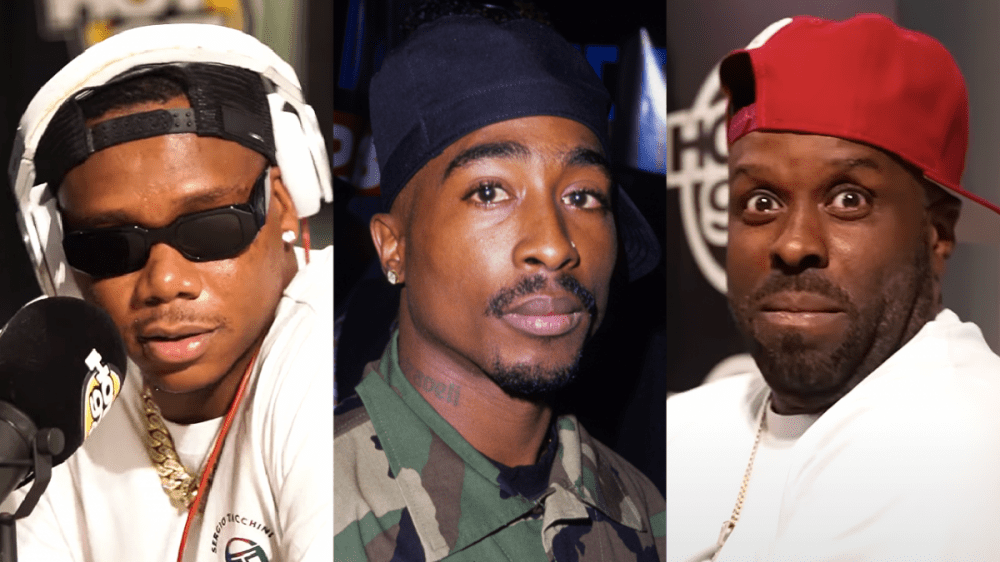 Symba has come to 2Pac’s defense over Funkmaster Flex’s disparaging remarks made about the late rap icon.

The Bay Area native paid a visit to Hot 97’s headquarters in New York this week, where he was invited to showcase his highly-touted lyrical talents for the long-serving DJ.

Symba — who boasts co-signs from Dr. Dre, Snoop Dogg, Lil Wayne and more — had a more pressing issue on his mind during his freestyle, though, as he confronted Flex for “disrespecting” 2Pac over the years.

“Flex, it’s an honor to meet you, but let’s be clear / I’ve done had a bone to pick with yo ass for four years / You’ve been a big part of this culture my whole life / So what I’m ’bout to say almost don’t feel right / You say some wild shit, most times you actually right / But all that disrespecting 2Pac shit stops tonight,” he rapped over Wu-Tang Clan’s “C.R.E.A.M.” instrumental.

Symba’s lyrical lecture appeared to have achieved its desired goal as Flex interjected: “Alright! Alright! I’ma stop! I won’t say nothing about him no more. They love him in The Bay! He stopped me today. Never more,” before adding: “Rest in peace, 2Pac.”

Symba’s freestyle continued: “As a West Coast n-gga, ‘Pac gave all of us pride / That’s why when you said what you said we was surprised / How you wait 20-something years he died / To come on this muthafucka and keep screaming, ‘He lied!’”

“And he ain’t alive to tell his side / But I ain’t mad at you ’cause you was speaking your mind / To keep it real, you said what’s on half of these n-ggas’ minds / Just the next time you say it don’t sound like you ’bout to cry.”

As Symba explained in his Instagram caption, “Yesterday made 26 years since Pac died… it was only right that I let @funkflex know how I felt about his comments on the goat.”

In the same Instagram post, Symba shared a video of Funk Flex’s comments about 2Pac that made headlines in 2015. The footage shows the Hot 97 DJ tearing up while blaming the late All Eyez On Me rapper for The Notorious B.I.G.’s 1997 death.

“Biggie wouldn’t have fuckin’ died if that n-gga hadn’t have lied!” he said in the clip, referencing ‘Pac pointing the finger at Biggie for his 1994 shooting at NYC’s Quad Studios. “He lied! Y’all n-ggas worship him. Lied! Never ever said nothing about him. Fucking lied! Nobody wants to tell the truth.”

Flex, who was apparently in the building at the time of the shooting, also claimed 2Pac shot himself in the leg by accident after “panicking” during the robbery attempt. His remarks not only angered ‘Pac fans, but were ridiculed, with comedian Mike Epps famously spoofing Flex’s emotional rant.

Funk lex previously spoke ill of 2Pac in 2010 when he was heard saying he “don’t fuck with 2Pac” and “don’t suck 2Pac’s dick” in a video rant.

Flex later clarified his comments on-air, saying: “I know some of his fans are upset. Not only do I respect his music, I respect what he put down, what he made happen, the records he made, the records he sold, his positive energy in the beginning … and I know how passionate he was about his music. That’s not where any of this came from.

“My bad to his fans who feel like I’m kicking somebody when they’re not here. But when he was here, ‘Pac was pushing out all that negative energy on television and in magazines. I know everybody loves the man and they should love him. But, I don’t have to love him like that. I don’t have to love ‘Pac like that. I don’t. This is just the way I feel.”

Symba, meanwhile, is gearing up to release his new mixtape, Results Take Time, his first Gangsta Grillz offering with DJ Drama. The project is set to arrive on Friday (September 16) and boasts appearances from Pusha T, 2 Chainz, Roddy Ricch and more.