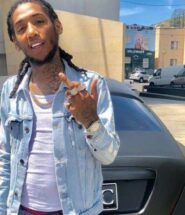 Miami Beach, FL – The man believed to be responsible for the 2019 shooting death of Chicago rapper AAB Hellabandz (real name Ameer Golston) has reportedly been arrested for first-degree murder. According to Local10 News, 26-year-old Austin Hall was busted by Miami Beach, Florida detectives who accuse Hall of pulling the trigger that May evening on South Beach.

They think Hall went to Miami Beach to seek revenge after Golston was named as the alleged shooter in a 2015 nightclub murder. He was also a man with nothing to lose. Hall had just been convicted of armed robbery and came to Miami Beach before having to turn himself in to begin serving his sentence.

Miami Beach homicide detective Alberto Porro said of the South Beach shooting, “It was pretty brazen to assassinate somebody in the middle of the street, next to a nightclub that was packed.”

Golston was shot and killed on May 11, 2019 near club Cameo in a hail of gunfire. A Miami Beach officer heard the shots and saw a crowd fleeing the scene. It was then he discovered Galston lying on the ground unresponsive and motionless.

In surveillance footage of the incident, Hall steps in front of Golston, words are exchanged and Hall punches Golston in the face. Golston then stumbles and tries to defend himself but winds up running instead. Hall begins to chase him before raising his right arm and pointing a gun at Golston. He fires several rounds as Golston ducks between cars to try to avoid the bullets.

But Golston falls face first to the pavement and Hall is able to catch up to him. He stands above Golston and shoots him several times in the back and head. He was pronounced dead at the scene.

Porro said his team solidified the case with surveillance video, telephone record  and the movements of Hall’s associates, which led them to Chicago and Chicago PD.

“Without them, this would be an unsolved case right now,” Porro said.

Fellow Chicago rapper Lil Durk was among the first to mourn Golston’s death on social media, writing on Twitter at the time, “Rip to my dawg. Love you 4ever hella Bandz.”

Rip to my dawg 🥺 love you 4ever hella Bandz