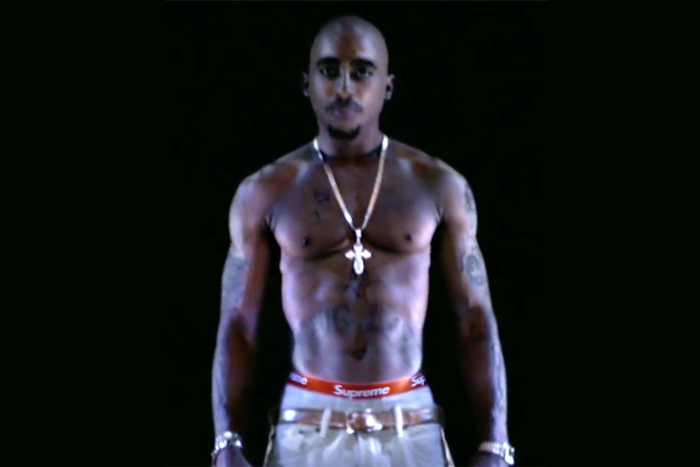 Supreme is resurrecting Tupac for its latest collection.

The streetwear brand has shared a teaser of its Spring/Summer 2020 collection starring a hologram of the late rap legend. In the video, which was posted on Instagram Sunday, the Pac hologram sports Supreme’s signature red box logo on his underwear below his tatted “Thug Life” torso. He then picks up the mic to perform “Hail Mary” before the Supreme logo flashes at the end.

The teaser received a mixed response from fans. “Supreme brought Tupac back to life,” wrote one commenter, while others saw it as disrespectful to his legacy. “This is wrong, using the death of a person to advertise your latest product,” wrote a Hypebeast commenter.

Fans will recognize the hologram as the same one that appeared during Dr. Dre and Snoop Dogg’s headlining set at Coachella in 2012, where he performed “Hail Mary” and “2 of Amerikaz Most Wanted” with Snoop. The rappers were even considering taking the 2-D image on tour with them.

The Tupac Supreme collection will reportedly include a T-shirt featuring a photo of the hologram and could drop as soon as this Thursday. One fan has shared a mock-up of what the tee could look like.

🗓 Releasing this Thursday for Week 1

Tupac’s estate is also launching its own Me Against the World capsule to celebrate the album’s 25th anniversary. The merch collection includes hoodies and tees, with prices ranging from $30-95. They are now available on shop.2pac.com.