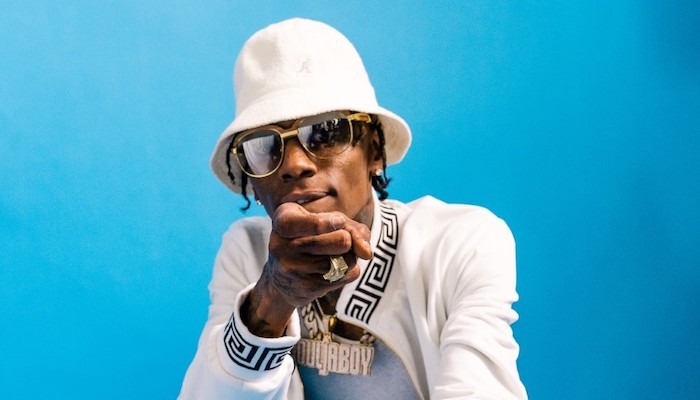 It’s been 14 years since Soulja Boy took the music industry by storm with his chart-topper “Crank That” and the iconic dance that accompanied it. Now, he’s ready to take the big screen, small screen, fashion world, and even the tech space by storm with that same energy. We sat down to talk to Soulja Boy, whose “Life of Draco” show is set to premiere on the REVOLT app on January 21, to find out what fans can expect from the show and in the artist’s future.

“Life of Draco is a show about us touring- Miami, Nashville, everywhere we went on tour,” he explains. “Fans get to see behind-the-scenes footage from when I go to sleep to when I wake up to the performances, which were really crazy. I’ve also got celebrity guests on [the show]- Justin Bieber, Bow Wow, TI, Rich the Kid, and more. You’ll see who I’m working with every day, who’s around me for my day-to-day. You’re going to get to see everything.”

Soulja further notes that the footage isn’t pure entertainment, but also a documentary of sorts, showing the hard work that he and his crew put in working behind the scenes to put on shows for sold-out venues across the country.

Soulja is clearly no stranger to hard work because, in addition to his upcoming show, he has also been working hard on his new clothing line, Soulja Boy Apparel, and his very own gaming console. (Fans will also get to see some of the behind-the-scenes development of his clothing line and video game console on the show.)

“It’s really bright, really colorful,” he explains. “It’s really pop-out, stand-out for anybody. You know, I always want to stand out. I never wanted to blend in with the crowd. If I’m at a party or I’m at an event, I want to be seen. We’ve got bright orange colors, cartoon logos, a lot of different designs.”

Another bright trademark accessory of Soulja Boy’s is his SouljaGame, a branded handheld game console developed under the TRDR Pocket brand.

“I’m the first rapper with a video game console,” he says holding up a bright red console. “The response on this has been crazy too. You can download whatever game you want with plenty of apps. You’re going to be able to download the REVOLT app and watch the series on the Soulja Boy game console. It’s handheld, but you could plug it into your TV if you want to too. No rapper has ever done this in history.”

While Soulja may be trailblazing his own way as a rapper-turned-video game developer, he is hoping to follow in the footsteps of other rappers and make a name for himself as an actor.

The rapper, who will make an appearance on the hit TV show Atlanta, had the following to say about acting: “I just feel like, acting, you know, It’s something different. I’ve always been in the music industry, always recorded songs and recorded albums, but I always wanted to do acting. It’s different from music. You know, when I first got into this industry, I thought about acting, but I felt like I needed to drop my music, but now I feel like I’ve released a good amount of material to where I can focus strictly on acting.”

He pauses, laughs, and then adds, “I feel like my face belongs on the big screen.”

As for what actors he wouldn’t mind sharing screen time with?

“Will Smith, Denzel Washington, Zoe Saldana, Adam Sandler, Ben Affleck. Just put me in a movie with anybody! Movies and TV- that’s all I want to move into in 2022.”

As he looks to the future, Soulja notes that his New Year’s resolution is to leave all things negative in 2021.

“I just felt like I can’t be an actor and be doing TV shows and trying to be number one at the box office if I’m beefing or if I’m having any negative energy around me,” he says. “All of my time now is going to be put towards work, towards putting out the best quality material, so I can’t even have my name affiliated with anything negative.”

While he summarizes his current state of mind as “new drip, new brand, new swag,” he stresses that at the end of the day, whatever he does, is about keeping his fans entertained.

“I just want the people, the audience, the general population, to watch the show, watch the movies, and to stay entertained no matter what it is because, at the end of the day, it’s all entertainment.”

The Life of Draco premiers exclusively on the REVOLT app, January 21.

The REVOLT App is available on most major smartphones and operating systems. More information can be found at https://www.revolt.tv/watch/.