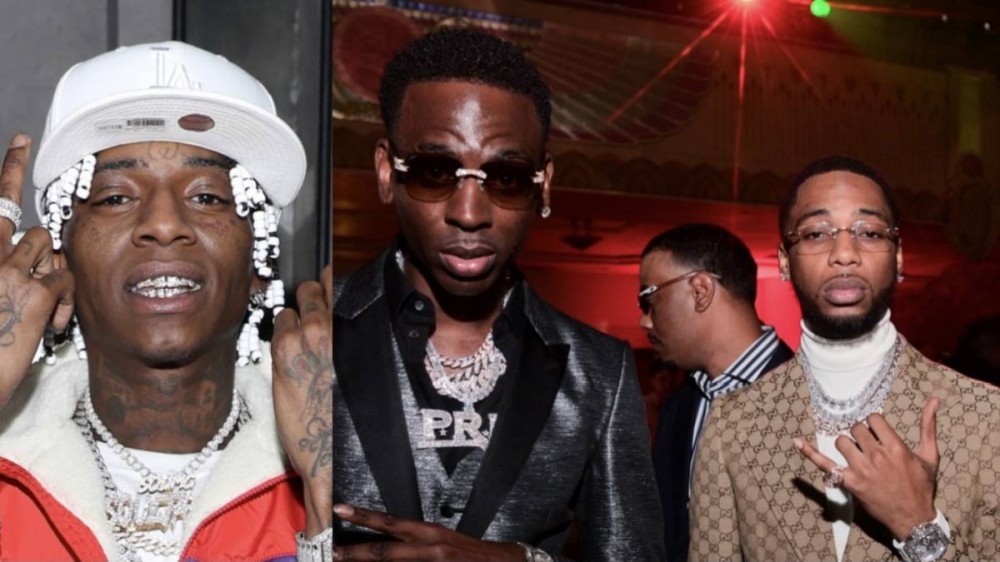 Young Dolph made a few claims on Wednesday (November 10) that he makes over $100,000 per show as an independent rapper. Soulja Boy felt like he was lying and said he was the only real indie rapper, but he isn’t finished igniting the fire.

Later on that day, it seemed that Soulja Boy drew a response from Key Glock and he took to his Instagram Live to send a few more shots in the direction of Paper Route Empire. Soulja Boy was not trying to play nice with his peers as he hurled several insults at them.

“Man, Young Dolph, if you don’t get your bitch ass artist out my muthafucking DM n-gga, fuck you talking about n-gga? N-gga thought he was bulletproof until he got shot like Dolph n-gga. Ain’t you the n-gga that got shot at 100 times that got popped and shot at all the time n-gga.

The beef trickled into the DMs once again when Big Draco asked Key Glock what he wanted to do about their situation. Glock seemingly replied, “Nothing!! I’m scared” — although that could’ve been sarcastic.

Soujla Boy then got on Instagram Live to speak about this new beef relating to his issue with Kanye West. According to Soulja Boy, Dolph and Glock came out of nowhere despite the Atlanta rap star starting trouble with them first.

“So how it started off, I said I’m finna paint all my cars yellow. I got the yellow Lamborghini Urus, I got the yellow Bentleys, yellow Ferrari’s,” Soulja Boy said during his Live, claiming Glock stole his whole style for The Yellow Tape series.

Soulja then shifted his attention to Dolph and his $100,000-per-show statement claiming all that was a lie. He didn’t understand why Dolph would have a problem with him if Soulja was telling the truth.

“This n-gga mad because he signed to a muthafucking record deal, and his whole thing is I’m independent, I’m independent,” Soulja Boy said. “N-gga did I lie? N-gga you signed to Empire stupid ass n-gga. Why the fuck you mad?

“This n-gga mad at me because he’s signed to Empire it wasn’t no secret fuck n-gga. I’m just a famous ass n-gga that said it. You should’ve shut the fuck up and kept saying you independent like that if you really wasn’t independent then I wouldn’t have exposed your ass.”

If this beef turns out to be real, then Soulja has nothing but time now that he squashed his problems with Kanye West. The Chicago legend shared a text message between him and Big Draco on Instagram on Wednesday (November 10). Kanye admitted he should’ve told Soulja Boy he wasn’t going to be using his verse on Donda‘s “Remote Control.”

“Yo It’s Ye. Love you bro. I should have told you I wasn’t gonna use the verse,” Kanye wrote. Soulja Boy accepted Ye’s apology, replying, “Love you too bro. That’s all I wanted.”