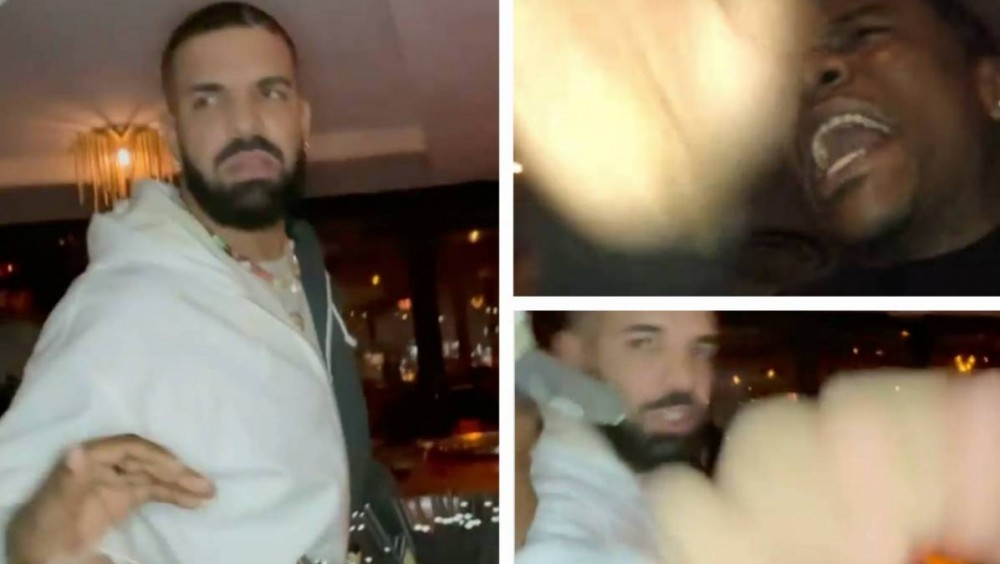 Drake has been known to play along with the internet’s jokes … as long as they don’t go too far. If his IMDb profile is to be believed, actor TravQue is “best known on social media for his comedic antics.”

On Wednesday (April 7), said “comedic antics” were exemplified on his Instagram and TikTok accounts when he pulled an apparent prank on Drake himself.

At an undisclosed bar setting, TravQue bombards the bartender with an order of “ 2000 cases of Virginia Black” (Drake’s whiskey brand), “40 cases of Bumbu” (Lil Wayne’s rum brand) and three cases of tequila — all on Drake’s tab.

After antagonizing the bartender by spitting combos of Drake’s “Nonstop,” “Greece,” and “What’s Next?” lyrics, the 6 God tells TravQue to “relax” with a noticeable look of disgust on his face. When the social media comedian does the exact opposite, Drake pushes the animated agitator away before grabbing for the phone that was shooting the entire debacle.

Although Drake didn’t reshare the instantly viral clip, fans should go ahead and note TravQue’s résumé (and the lack of swarming security) as an indicator the entire encounter was a skit. Rappers such as Desiigner, Lil Mama, Torae and even former Drake-skit collaborator Shiggy Show, found the clip nothing short of hilarious in the Instagram comments.

TravQue has hit up Drake’s “No Guidance” collaborator Chris Brown, Jim Jones, Dave East, Swae Lee and Jadakiss for a similar troll jobs in the past.

Drake has all the reasons to obtain random press these days. Although his announced sixth studio album Certified Lover Boy is still devoid of a release date, his Scary Hours 2 EP has proven to be a suitable alternative for the Hip Hop space in the meantime.

The three-song project made Drake the first artist to ever debut three songs in the Billboard Hot 100’s Top 3 slots, gave him his eighth No. 1 hit with “What’s Next?” and even found time to cram in some Lil Baby and Rick Ross features.