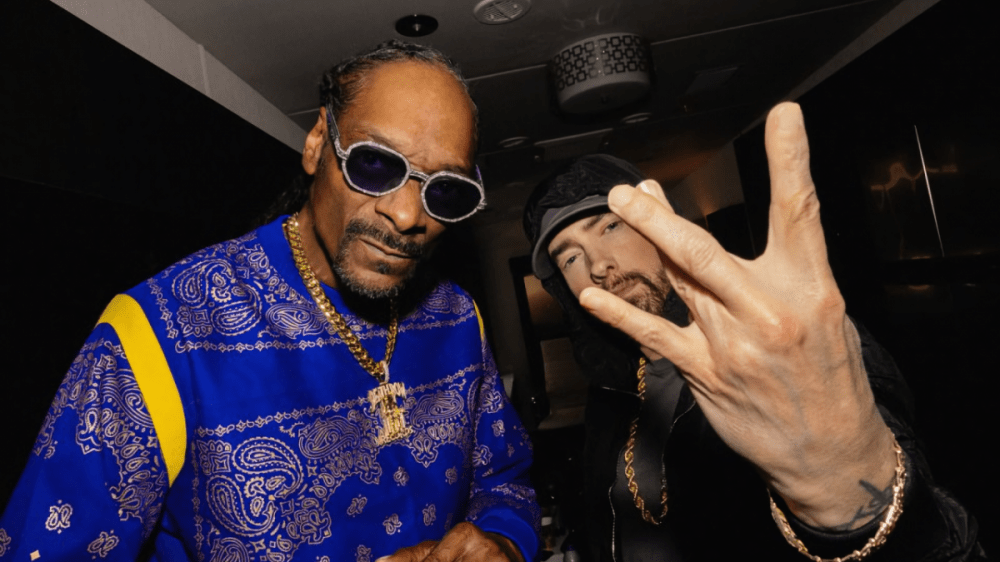 Slim Shady is joining the Metaverse, and it’s all thanks to Snoop Dogg. The West Coast legend’s son Cordell Broadus shared a video on Twitter of his father speaking to Eminem on his iPhone, and by the end of Snoop’s smoke-filled conversation, the two Super Bowl LVI performers had reached an understanding.

In the video, Eminem can be heard saying that’s “a crazy-ass idea.”

“Story time with #ChampMedici,” his son captioned the video. “I saw Paul Rosenberg eating dinner at Barclays November 3rd 2021 and I didn’t hesitate to tell him to bring Em 2 this space, he wasn’t convinced / so I had my client @SnoopDogg call Em November 21st to convince him (here’s the phone call).”

Story time with #ChampMedici
I saw Paul Rosenberg eating dinner at the Barclays November 3rd 2021 and I didn’t hesitate to tell him to bring Em 2 this space, he wasn’t convinced / so I had my client @SnoopDogg call Em November 21st to convince him (here’s the phone call ) pic.twitter.com/dsczQaHas5

Cordell then gave a breakdown of how he essentially made this Metaverse collaboration happen, and concluded by telling his followers to always believe in their vision.

“Im not bragging or making this about me it’s just a beautiful thing to see how time works and ideas are always on our side,” he wrote on Twitter. “Any go getters out there that may have to go through a journey of people fully not understanding ur vision…have faith & be patient.”

The Snoop and Em Metaverse collaboration comes after the pair linked up for a new song called “From The D 2 LBC,” which arrived after the duo had experienced a brief rift in their relationship. Slim Shady grew upset in 2020 after Uncle Snoop didn’t name-drop him on his Top 10 rappers list. Eminem expressed his outrage on his Music To Be Murdered By: Side B track “Zeus.”

“As far as squashing beef I’m used to people knocking me,” he raps. “But just not in my camp/And diplomatic as I’m tryin’ to be/Last thing I need is Snoop doggin’ me/Man, Dogg, you was like a damn god to me/Meh, not really (haha)/I had dog backwards.”

In a December 2020 sit-down with Shade 45, Em elaborated on Snoop’s apparent disrespect.

“Everything he said, by the way, was fine, up to a point,” Em explained. “Him saying I’m not in his top 10 because there are some rappers in the ’90s I can’t fuck with…A: Him saying Dre made the best version of me, absolutely, why would I have a problem with that? Would I be here without Dre? Fuck no, I wouldn’t. The rappers he mentioned from the ‘90s—KRS One, Big Daddy Kane, [Kool] G Rap—I’ve never said I could fuck with them. I never said that.”