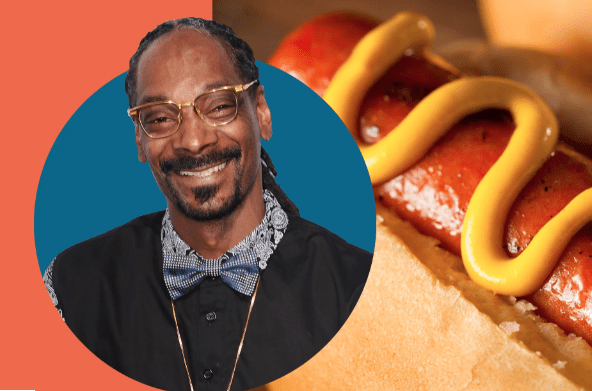 A Billboard report has confirmed that besides cookbooks, cannabis and gin, Long Beach rap legend Snoop Dogg will now be hawking hotdogs which will be aptly dubbed “Snoop Doggs”.

Snoop applied last month at the U.S. Patent and Trademark Office for a federal trademark registration for the name which he says he will use to sell franks and other types of sausages. Snoop[‘s lawyer filed for the name as an “intent-to-use”, which means he hasn’t actually launched the hot dog brand, but wants to lock the name down for future use.

You would’ve thought that franks would be the last business Snoop would get involved in because back in 2016, Snoop made headlines with an appearance on Jimmy Kimmel Live! in which he watched a step-by-step process of how hot dogs are made. By the end of the segment, Snoop said: “This is a hot dog!? Oh cuz, I ain’t never eating a m*****f****** hot dog! If that’s how they make hot dogs, I don’t want one. I’m good.”

In 2011, Snoop filed a similar trademark application for “Snoop Scoops” for use as a brand name for ice cream, but he didn’t pursue that endeavor. He came back again in 2015 with a cannabis company called Leafs By Snoop and in 2020, the “Drop It Like It’s Hot” rapper debuted a liquor line called Indoggo Gin

No further details have been disclosed about “Snoop Doggs”, but don’t be surprised if you see them on your supermarket shelves in the near future.