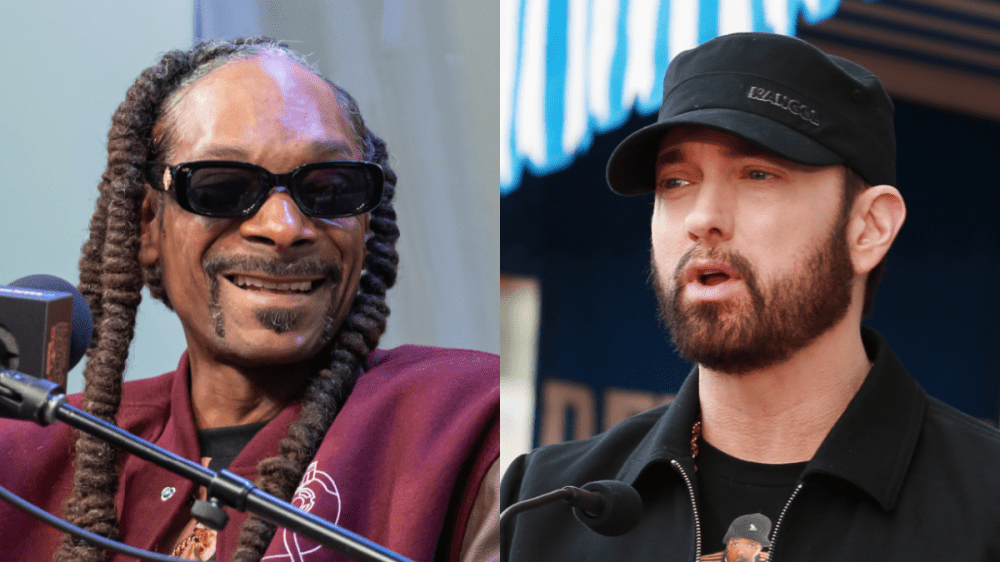 Snoop Dogg and Eminem‘s decades-long friendship soured last year when Snoop left Slim Shady out of his top 10 rappers of all time list during an appearance on The Breakfast Club, arguing his lofty stature in the rap game is due to his association with Dr. Dre.

The omission didn’t sit well with Eminem, who responded to Snoop Dogg on his 2020 album Music To Be Murdered By: Side B. “Last thing I need is Snoop doggin’ me/Man, Dogg, you was like a damn god to me/Nah, not really/I had ‘dog’ backwards,” he rapped on “Zeus.”

Snoop dismissed Em’s lyrical jabs as “soft-ass shit,” while Method Man and KXNG Crooked weighed in on the spat between the two Hip Hop titans. However, the “Bitch Please II” collaborators eventually managed to settle their differences, with Snoop revealing on Instagram in January that he and Em are “good.”

During his return to The Breakfast Club on Wednesday (October 27), Snoop Dogg explained how he and Eminem buried the hatchet, revealing they had a “long conversation” in which Snoop apologized to Em for speaking out of turn.

“Man, I love Eminem! The thing is that we love Hip Hop so much, we competitive, we battle rappers, so that was supposed to trigger that in him,” he said of leaving him out of his top 10 rappers list. “But we brothers and we family so we learned to appreciate each other for what we do and how we get down, and we had a long conversation about the respect that we have for each other and the way we need to talk in public about each other.

“I felt like I was out of pocket. I apologized to him and I let him know that I’m just bettering myself. I make mistakes, I ain’t perfect, I’m Snoop Dogg.”

Snoop Dogg, who recently celebrated his 50th birthday, has been applauded for owning up to his mistake. “It’s called GROWTH. Wish it was contagious,” one fan commented on The Breakfast Club‘s Instagram post, while another wrote, “That’s G Stuff!!! Tell ya Dawg when you wrong!”

Snoop Dogg and Eminem are set to join forces at the Super Bowl LVI next February, where they will perform at the Pepsi halftime show alongside fellow Hip Hop and R&B luminaries Dr. Dre, Kendrick Lamar and Mary J. Blige. It appears there’s also a collaboration in the works between the “Bitch Please II” pair.

Watch Snoop Dogg’s full Breakfast Club interview below, in which he also discussed his upcoming album The Algorithm, out November 12.