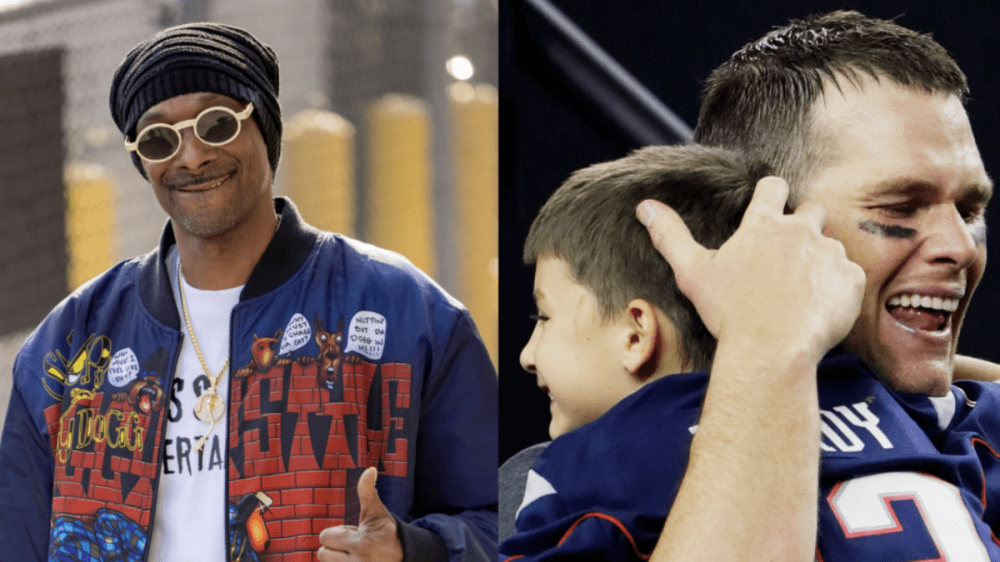 Atlanta, GA – Snoop Dogg has enjoyed one of the most versatile and wide-ranging careers of any rapper ever and it’s still going after three decades.

As a huge sports fan, Snoop has always been in the mix around Super Bowl weekend and even though he’s a Pittsburgh Steelers fan, he’d often find himself partying with the New England Patriots during any of their six 21st century Super Bowl afterparties.

Joining Tom Brady and Jim Gray for an episode of their Let’s Go podcast on Monday (October 11), the legendary quarterback reflected on a time Snoop performed at the hotel celebration following his Patriots defeating the Los Angeles Rams in Atlanta to clinch his sixth Super Bowl ring. Brady had his son with him who was loving Snoop’s stage set filled with exotic dancers.

“I brought my son, my son was 11 at the time to the afterparty and the game ended pretty late,” Brady recalled. “So it was midnight. It was in our hotel. So we had this so special, special spot on the stage [and] Snoop had a pole up and there was some girls, they were clothed. But at the same time, there was a pole and my son, he had his eyes open and he was listening to [the] music. And I said, ‘Jack, cover your eyes.’ And he goes, ‘Dad, I’m good. I’m good.’

“So it’s two in the morning. And we are having the time of our life and ‘I’m like, holy cow. If he tells his mother, I am, I ain’t going to see this kid for a long time, but I’m telling you, it was one of the best moments of my life. We still talk about it too.”

You know it’s a great party when @SnoopDogg shows up… Full episode of "Let's Go!" with @JimGrayOfficial is out now: https://t.co/tJnW3EiS9M @SIRIUSXM pic.twitter.com/xVAJe7kT3V

Another part of the episode finds Tom Brady quizzing Snoop Dogg about the last time he was drug-tested as Brady has been tested often throughout his career.

The West Coast legend guessed 1991 with a laugh and then jokingly snapped on Jim Gray who asked if he passed the drug test.

“No, I didn’t, Jim,” Snoop Dogg replied. “What I look like passing a drug test?  That’s one pass I could never complete!”

If Brady and the Tampa Bay Buccaneers make it back to Super Bowl LVI next February, he might be partying with Snoop Dogg again since Snoop is part of the Hip Hop-centric halftime show slated for Los Angeles alongside Dr. Dre, Kendrick Lamar and Mary J. Blige.

Listen to the episode below.