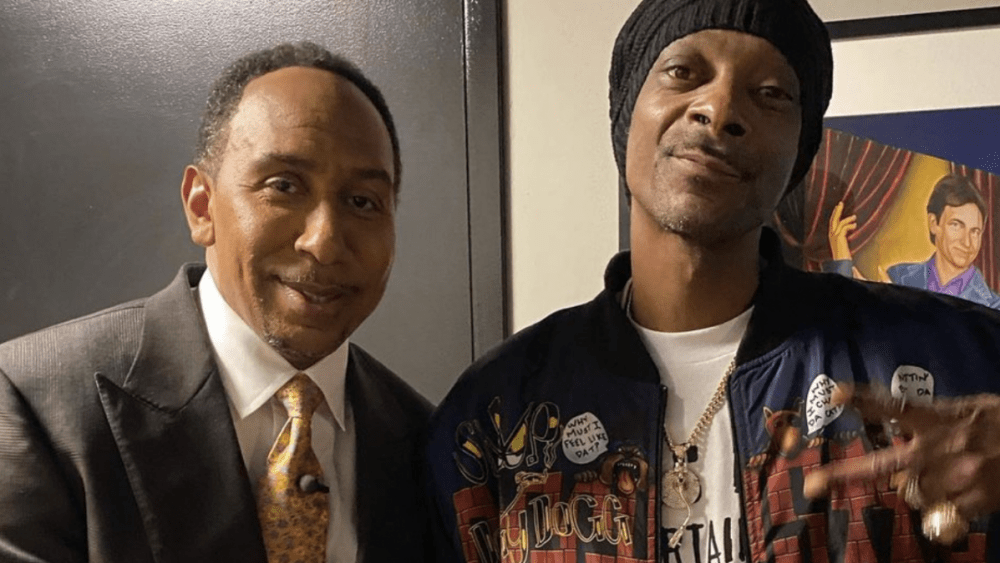 Los angeles, Ca – ESPN personality Stephen A. Smith is filling in as a guest host this week on Jimmy Kimmel Live! and he welcomed Snoop Dogg as his opening guest on Monday night (August 23). While Stephen A. often implores athletes to “stay off the weed,” Snoop Dogg is one of the most famous smokers in the world and preaches the medical benefits of marijuana.

However, the pair agrees from the standpoint of athletes abiding by marijuana restrictions laid out by professional sports leagues to make sure players aren’t being fined or suspended and losing out on paychecks.

“When I’m speaking to entertainers, we don’t have a commissioner so we don’t get drug tested. When Stephen A. is speaking, he’s speaking to the athletes. Don’t get it confused, you can hang out with the rappers, but you can’t do what the rappers do.”

The West Coast legend is a major advocate for sports leagues to relax their marijuana restrictions to help aid in the recovery of their athletes.

“These athletes take these pills and they get addicted to these pills, but it still doesn’t give them the relief that they need,” Snoop said. “Through the CBD, THC, marijuana and cannabis, they’re able to find a relaxation and get the medical treatment they deserve without the later side effects. Hockey and baseball don’t test for marijuana, so it should be the same for basketball and football.”

Snoop Dogg then reflected on his friendship with one of his “heroes” in the late Kobe Bryant, who would have turned 43 years old on Monday.

“It felt like we both arrived at the same time and it felt like our rise was together,” The Doggfather said. “When I would go to Lakers games and build a friendship with him knowing that I was a diehard fan. Then to see him built a family, I built a family and I’ve seen our careers go into a different light to where we became fathers and more positive role models outside of what we were doing.”

“That’s what made him my hero,” Snoop continued despite Kobe being more than six years younger than him. “You could be younger, less experienced than me, but if you do things that inspire me, you could be my hero.”