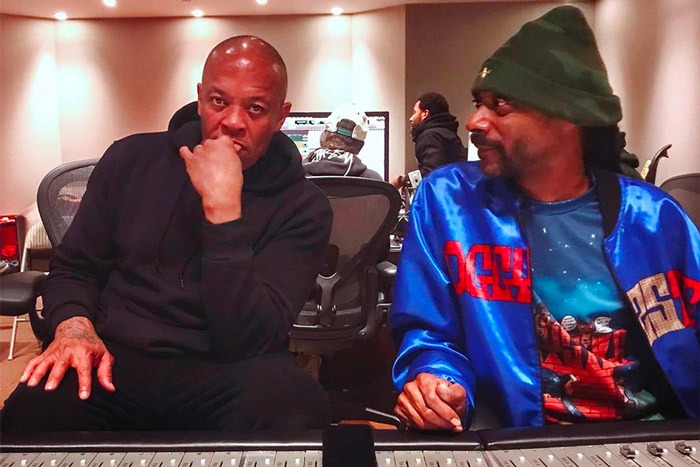 Get ready for the next episode.

Snoop Dogg and Dr. Dre are back in the studio and may be cooking up new music. On Saturday, Tha Doggfather shared a photo of him and the legendary producer sitting side by side behind the console. “Bac2gether again,” he captioned his Instagram pic.

“Ooo please give us 1 more album! Let the good doc do every track! All we need is 10 songs unc!” Bow Wow commented on the post, while MC Lyte added, “Ooooooooo.”

Kanye West was also in the studio with Dre. Snoop shared some “exclusive footage” from their session, which he recorded on the low. “Kanye West got some hot music,” he whispered. “Dr. Dre touched it.”

Dre and Kanye have been working on a long-awaited version of Jesus Is King, which Ye first teased in November. “Ye and Dre Jesus is King Part II coming soon,” he said at the time.

Someone in the background of Snoop’s video can be heard talking about this being the first Dre album without a parental advisory sticker. “In 35 years, that’s never happened,” says Dre.

On Friday, the billionaire rapper revealed that the “JESUS IS KING DR. DRE VERSION” was still in the works and even posted a photo of Dre’s rug with orange juice stains.

“IM SORRY DOCTOR DRE I SPILT THESE THREE DROPS OF ORANGE JUICE MIXED WITH UUUUUUM WHILE WE WERE FINISHING OUR FIRST PROJECT,” tweeted Ye.

IM SORRY DOCTOR DRE I SPILT THESE THREE DROPS OF ORANGE JUICE MIXED WITH UUUUUUM WHILE WE WERE FINISHING OUR FIRST PROJECT#WESTDAYEVER pic.twitter.com/trrd6LT3QJ

Fans were surprised to see Snoop in the studio with Kanye as he’s been critical of him in recent years. In 2018, following Kanye’s support for Donald Trump, Snoop posted an altered image of the “new Kanye West,” which shows his skin looking white. “That motherfu**er is ape-shit crazy,” he said.