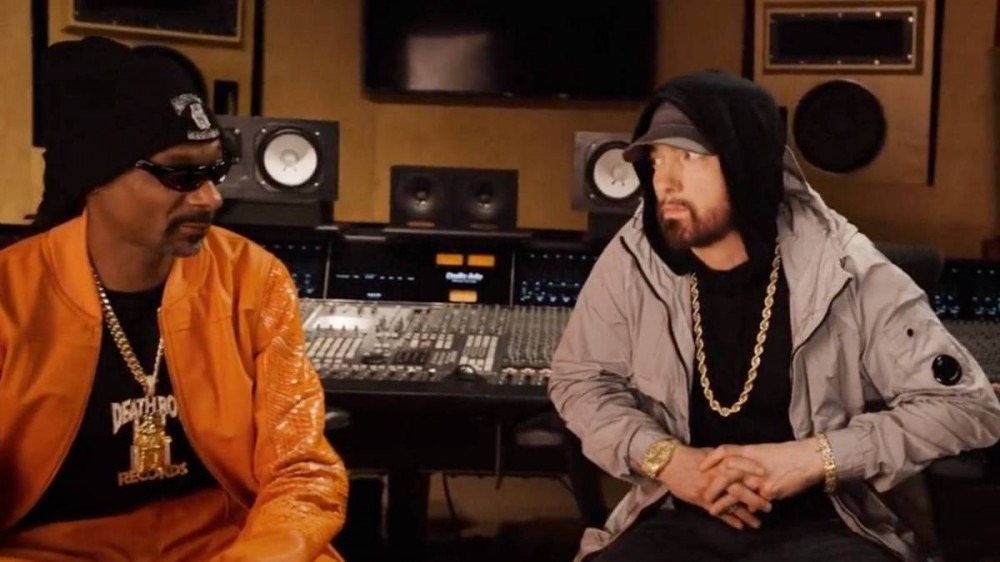 Snoop Dogg and Eminem’s relationship goes way back to the 1990s when Dr. Dre signed the then-burgeoning rap star to Aftermath Entertainment. Aside from collaborating on The Marshall Mathers LP single “Bitch Please II” in 2000, they also toured together as part of the Up In Smoke Tour that same year along with Dr. Dre, Ice Cube and Xzibit.

Twenty years later, the two rap titans finally joined forces again, this time for the single “From The D 2 The LBC.” Serving as the lead single from Eminem’s upcoming greatest hits album Curtain Call 2, the track bridges finds both Hip Hop pillars spraying their bars like uzis. On Wednesday (July 20), Eminem shared a clip of himself and Snoop in the studio in which the D-O-Double-G admits Slim Shady pushed him to level up his bars.

The clip begins with Eminem telling Snoop, “Yeah, but you killed it though, bro,” to which Snoop replies, “You challenge me Marshall. You put me back in my karate school days, where I used to be a young MC and, you know, loved the challenge of having to try new styles and new cadences.

“The rap game is supposed to be challenging; it’s supposed to make you dig in your bag. ‘Cause I’ve heard you on other songs with other rappers and you tend to show out, so I wanted to make sure I was going to represent.” Eminem agrees, “You showed out.”

Snoop Dogg and Eminem’s latest single arrived on June 23 with a tweet from Mr. Mathers promoting the song and its accompanying video. He wrote in the caption, “Took too long to reconnect with @snoopdogg you know we had to make a movie!” The post included the single art, which boasted a comic book aesthetic and two cartoon monkeys intended to represent both Snoop Dogg and Slim Shady and their connection to NFT collection Bored Ape. He quickly followed up with another tweet plugging the video.

The duo had a misunderstanding in 2020 after Snoop failed to name his fellow Dr. Dre protégé in his Top 10 rappers list. Shady returned fire with a lightweight jab on the Music To Be Murdered By: Side B cut “Zeus” when he rapped, “As far as squashing beef I’m used to people knocking me/But just not in my camp/And diplomatic as I’m tryin’ to be/Last thing I need is Snoop doggin’ me/Man, Dogg, you was like a damn god to me/Meh, not really (haha)/I had dog backwards.”

Snoop Dogg replied with, “Pray I don’t answer that soft ass shit.” During an December 2020 interview with Shade 45, Eminem explained it was Snoop’s tone that bothered him, saying in part, “I think it was more about the tone he was using that caught me off-guard ’cause I’m like, where is this coming from? I just saw you, what the fuck? It threw me for a loop.

“Again, I probably could’ve gotten past the whole tone and everything, but it was the last statement where he said, ‘Far as music I can live without, I can live without that shit.’ Now you’re being disrespectful. It just caught me off-guard. I wasn’t ready for that.”

But, with the single and recent link-up, it’s clearly water under the bridge. Check out the clip above and “From The D 2 The LBC” video below, which has already racked up over 34 million YouTube views since its release.