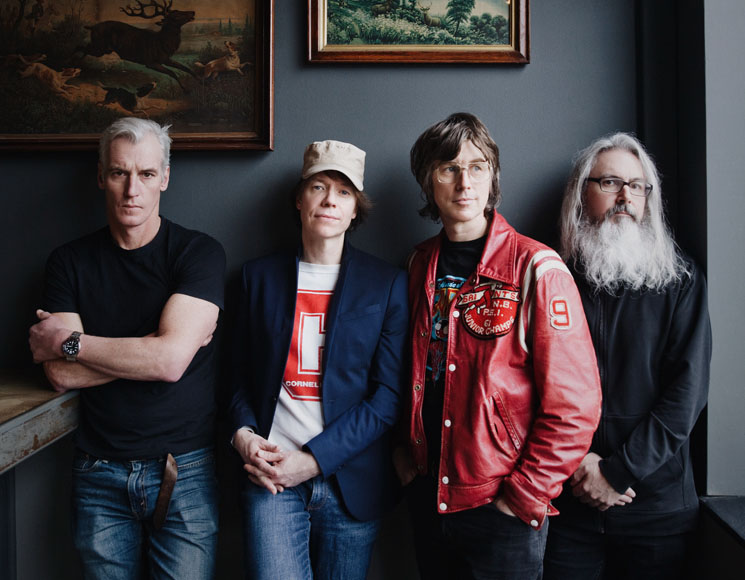 There aren’t many bands that have recorded 12 albums with all the original members contributing equally to the songwriting. With their brand new album, 12, Toronto-based Sloan have achieved something that not even the Beatles – arguably the greatest musical democrats ever – managed in their time. Sure, the Fab Four may have averaged two albums per year they existed, but they could only hack it for a decade. Sloan, on the other hand, have survived 27 years together, which might just be the most impressive feat all.

“By virtue the fact that it’s hard to keep a band together, let alone a band four songwriters together, I guess that can be seen as an achievement, sure,” singer/guitarist Patrick Pentland tells Exclaim! “I don’t know too many bands with four songwriters —  or even bands that have all the original members — 20-something years into their career. But I’m not saying that to thumb my nose at anybody.”

Sloan are very much an anomaly in their world. Although they did (sorta, temporarily) break up back in 1995, the separation was so brief that when they returned the next summer, it was with a brand new album they’d recorded in secret. Since then, the foursome have regularly put out new albums, while also revisiting the most popular ones in their catalogue reissues and tours. Not much has changed with their creative process, but it has gotten harder.

“It’s not a lack material, because there are four us writing, and we make a new record every two or three years,” Pentland says. “One the difficulties is just time. It’s not like there’s one songwriter who’s running it. Everybody’s doing it. There are four producers, four people working in the studio. I don’t work with anybody else until it comes to getting the drums done. I can play the bass, but I normally get Chris to do that. I have a three-year-old who I look after at home, so when I’m not recording or touring, I’m at home with her. I have to record at night, because everyone else does it during the day. It’s a timing thing.”

Once the leaders Canadian indie and alternative rock, Sloan have been recast as our country’s elder statesmen, and an undoubted influence on countless up-and-coming bands. Pentland and his bandmates seem all too aware their role.

“About the time we reached 2006’s] Never Hear The End Of It — we were in the third phase our career, which we’re still in now — we stopped being concerned with trying to make it in the States,” Pentland explains. “So we decided to recognize who we are in the 21st century: we’re not a new band, we’re not superstars, but we do have an audience.”

Following 2014’s Commonwealth, on which each member was given a side the double album to himself, Sloan returned to their standard template for 12, where members contribute three songs each.

“We don’t all do the same thing. It’s kind up to the individual what he will bring to the table,” Pentland says. “I would love to sit down and say, ‘Hey, let’s do an all-acoustic record’ or ‘Let’s do an all-synth record,’ but we don’t do that. I think the difference with Commonwealth was that it was treated more like a solo record, where we could go askew what we normally do. I wasn’t as concerned with playing the songs from Commonwealth live, whereas I think, with this one, I wanted to play these songs live, which isn’t always the case with me. So maybe we were just more interested in making an album that we could perform live.”

In addition to prepping these songs for the live setting, Pentland says there is also some effort put into making them radio-friendly. That might not be something that every member considers while they’re writing, but it definitely crosses his mind.

“For me, I do try to write something that can go on the radio, so we do have some kind publishing income laughs]. When I was writing ‘Money City Maniacs,’ ‘The Good in Everyone’ and ‘Losing California,’ I was doing it on purpose to try and get on the radio. I still put my mind to that when we’re making a record — that we can have one song that could make it on the radio.”

Despite having the lead single for the last three albums, however, Pentland lost those bragging rights to bassist/singer Chris Murphy. “This time it ended up being a new song Chris’s, ‘Spin the Wheels,’ which I like as a single. But I’m happy I don’t have the single this time, so that I don’t have to do the video.”

Pentland might not get that radio single glory this time around, but his songs do add some infrequent gravitas to the Sloan canon. For a number years now, he’s been vocal about his struggle with depression and anxiety, and how it has affected his ability to perform live. He took the opportunity to address his fight with his contributions to 12.

“Last year, I kind had a nervous breakdown, and then I received help from my family,” he says. “So a couple songs are about that. In the past I’ve been pretty open about my issues with depression and anxiety, and it’s now seeped into the lyrics. We’ve been doing them a lot in rehearsal and luckily I haven’t grimaced while playing these songs, so that’s good.”

12 lands on April 6 on Murderecords/Universal. Sloan are touring Ontario and the Canadian west in April, with a Halifax date on May 3 and Timmins on June 27. See all the tour dates here.