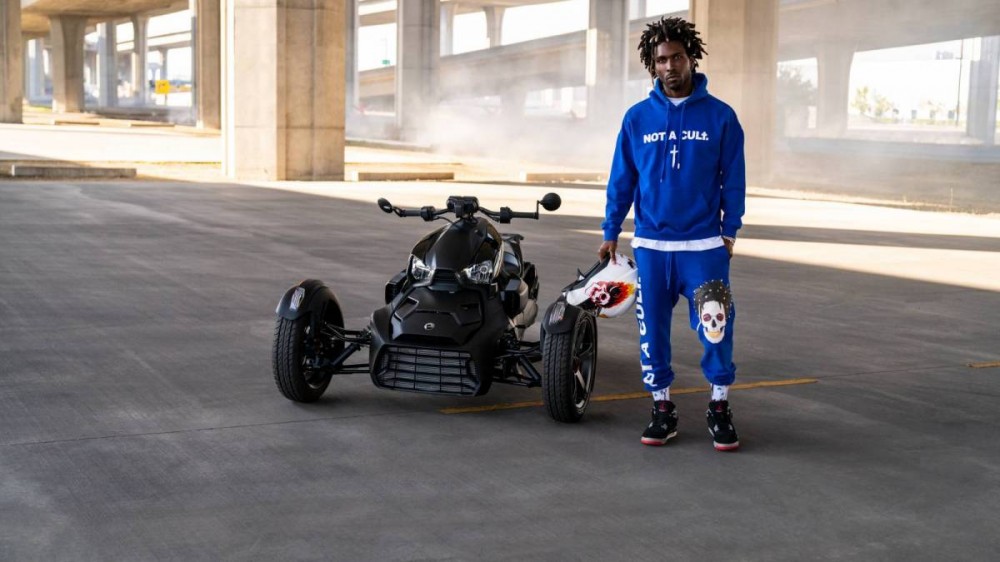 Growing up in New York in the 90s and 2000s, it was hard to escape the influence of DMX. In his recent collaboration with Can-Am, who manufacturers of the ubiquitous all-terrain vehicles that permeate urban roadways and desert landscapes, Brooklyn-bred artist, SAINt JHN is embracing his inner Ruff Ryder.

The Warner Records signee is standing alongside Joan Jett as a brand ambassadors for the Can-Am Spyder, and he’s not shy about showing off the product, as just about any visitor of Los Angeles’ famous Sunset Strip could probably confirm. As for the inspiration behind the partnership, SAINt JHN believes that subconsciously, the spirit of the Ruff Ryder laced early DMX videos undoubtedly played a role in his decision.

Note: This interview was conducted before the tragic passing of Earl Simmons.

“I grew up watching DMX. [“The Ruff Ryders Anthem” video] probably inspired my whole life,” SAINt JHN told HipHopDX in an exclusive conversation. “I know I wanted a Ruff Ryders chain. I still want one now. I loved what X and Drag-On did,” he added.

As someone that is influenced by various aspects of popular culture, the “Roses” crooner draws influence from many aspects of life outside of music, sometimes without even knowing it.

“I didn’t connect those two dots [when this Can-Am partnership came about],” SAINt JHN noted. “You know, the things that inspire you from a distance, sometimes you don’t realize until it comes full circle. Unconsciously it definitely inspired me. I think the idea is reinventing the vision for what the future of riding looks like, or the sport of freedom. Freedom is a sport. You gotta participate. So pairing me and Joan Jett was perfect, cause my music has a certain ruffled metal to it. You gotta use your vision for that, so when you pair that with Joan, some of our ideologies are similar in the way we’re groundbreaking with music. I think Can-Am was brilliant in standing us up next to each other, cause I would have wanted to stand up next to her anyway.”

Things changed for just about everyone when the pandemic hit in 2020, but for SAINt JHN it came at a time when his momentum was at an all-time high.

“I was in the middle of a tour in Australia when the world stopped,” SAINt JHN recalled. “It was the first time in my life that I had my shit together. It was the first time I could see my calendar to 9-10 months in the future. January I was starting a tour in Europe, and then I had to go do Australia, then America. Then I had a festival season, and then I was going to be in South Africa, and I was gonna end my show run in October. I had the clothing collection designed. Europe had their specific Castle collection ready to be released and I had the entire touring team ready and riled up. Got to Australia and right at the end of the tour the world froze and everything was on pause,” he added.

Despite the mandatory travel embargo, SAINt JHN, who won a Grammy for Best Remixed Recording for “Roses (Imanbek Remix)” and another one for “Brown Skinned Girl” with Beyoncé, Blue Ivy and Wizkid, was not about to let circumstances stop his grind.

“I didn’t really panic,” he vividly remembers. “When things are outside of the depth of my control, I try not to overthink it. I’m not directing this movie anyway, I’m just the star and they’re gonna give me my lines. I think of it in that way. When the world tells you exactly where everyone is at. What immediately ensued after that is, I came home and just started recording. It was the first time I had a break. I’d been on the road since 2016. I was on tour with Post Malone, then on tour by myself for a really long time. I got a break and the whole world got the same type of break. It wasn’t necessarily a gift but time is a gift and I got time so I put it into my art, I put it into my friendships that I wanted to see flourish, and I spent a lot of time thinking about the things that I wanted to think about, which sounds so heady but it’s important.

Part of the art SAINt JHN, who was nominated last week for a Billboard Music Award for “Roses,” was referring to was the aptly titled While The World Was Burning, which he said would not have come out the way it did had it not been for the circumstances.

While The World Was Burning was a collection I put out at the end of 2020, which I wouldn’t have done. The pandemic forced me to create a capsule collection of music that made me remember where I was on that day, a timestamp,” noted SAINt JHN. “I never previously had thought about my life or any of my art to be a timestamp, but while the world was burning was definitely that.”