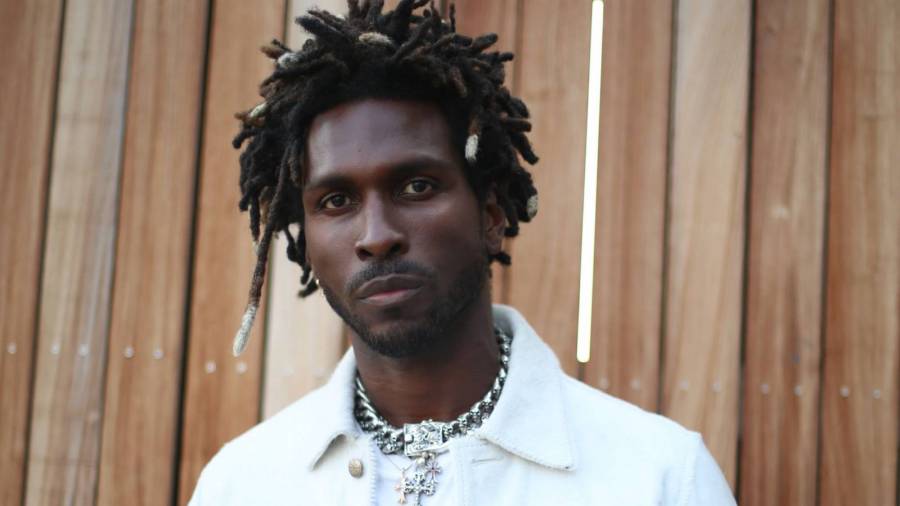 On his third studio album, While The World Was Burning, SAINt JHN acquired the biggest feature of his career when Kanye West laid down a pair of verses on “Pray 4 Me” and “Smack DVD,” respectively. Despite how people might feel about the Chicago legend, a feature by him is a good look regardless.

During his conversation with HipHopDX, SAINt JHN spoke on the collaboration with Kanye and how the Chicago legend listened to While The World Was Burning the way JHN intended.

“It was legendary because I played him the entire collection in Wyoming, and then we were going through that collection and looking at the 100 foot TV,” JHN said. “It’s actually the 70 foot TV. That was a smaller one. And he’s listening to it like somebody that’s the architect of these types of progressive ideas.”

JHN praised Kanye for pushing rap music beyond anyone’s expectations and explained how vital it was to have him lay down the groundwork for JHN to model his career after. According to the Brooklyn native, Kanye crowned him the leader of the next generation stating, “He told me from his mouth, he says, he’s generation zero, and I’m generation one and I perfected it.”

Getting the collaborations done with Kanye didn’t matter to JHN either. The moment he shared with Kanye and the comments he yielded was more than JHN could ever ask of him.

“I was happy with just the words,” JHN added. “I was happy just playing it for somebody that shared the same lineage of wild, bold listeners that would allow him to create something that didn’t exist. If I was in that lineage, if I was from that bloodline, then I made it already. So before we had a song, I had a great memory. Now I got a great memory and a great song out of it, and it just happened to be played for me.”

JHN explained he had no intention of getting Kanye on the album, not even from a branding standpoint. “Pray 4 Me” had already been made last year and was a record that JHN wanted to use to get his emotions out in regards to Nipsey Hussle’s untimely passing.

“I started making that song when Nipsey died,” JHN revealed to HipHopDX. “I didn’t know how to express myself when I was going through those degrees of grief, watching someone who meant so much to all of us. And I put it in music in a non-direct way. And I’m saying, ‘Pray for me.’ I really felt that way.”

JHN said the same feelings resonated through Kanye when he first played him the song. It makes sense given the bars Kanye dishes out about his mindset and current mental health on his verse on “Pray 4 Me.” Thankfully, Kanye heard the track because JHN told HipHopDX he wasn’t going to put out the song in the first place.

“I didn’t feel like it was correct or appropriate to put it out,” he said. “At the time when I started making a record, it was just something I wanted to express. When Kanye came, and he helped complete the entire painting, it felt important, necessary, and absolute that I needed to share it.”

When asked what he thinks the biggest misconception that people have on Kanye is, JHN said it’s the way his beliefs are communicated to everyone. JHN agrees that Kanye’s style of communication isn’t the best, but he believes his ideas are important and incredible. In JHN’s eyes, Kanye has elevated to a point where the language he’s speaking is something that not many can necessarily understand.

“I think he’s so diverse of an artist, and I think what happens to be the strange left turn is the way it’s communicated,” he said. “His ideas aren’t outrageous and offensive. His ideas are progressive. His integrity and his intentions are the same as they were the first time you raised your hand and said you believed in him.”

JHN continued, “The ability to communicate what he really is trying to do has always been sort of barbed by his way of expressing it. We will always find issue not with what he’s saying but with the way he’s saying it because when he breaks down his ideas, they come from a really organic, serious, and progressive place. But if it’s said with too brash a tone or too fast and too radical in emotion, then it’s not taken well. Depending on the way something’s communicated to you, you’ll take it differently.”

Check back for more of our conversation with SAINt JHN coming soon. In the meantime, head over to his Instagram page @saintjhn.