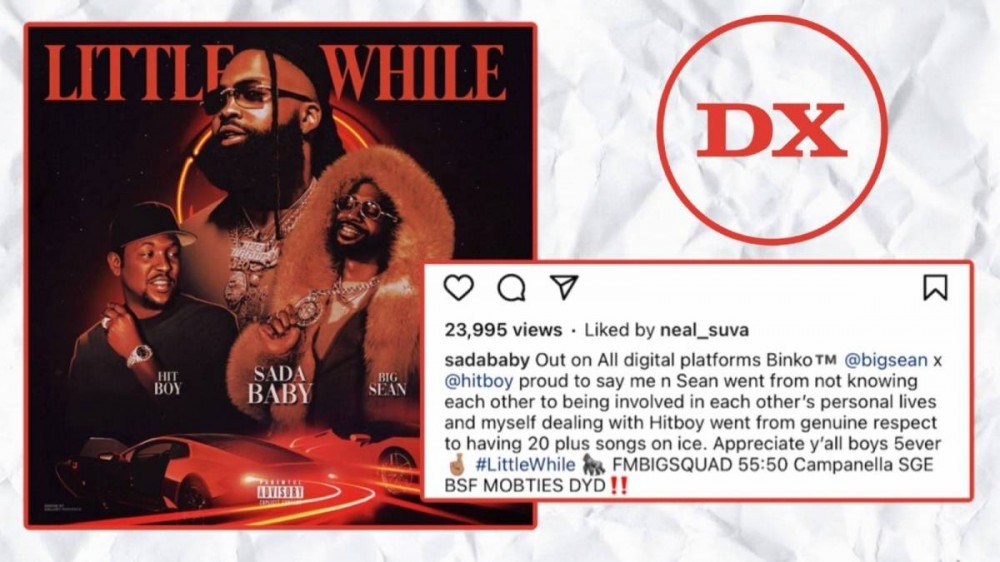 Sada Baby is celebrating his budding relationships with Big Sean and Hit-Boy, in addition to teasing a hefty stash of unreleased heat, as apart of the organic rollout of his “Little While” single.

After previously teasing “Little While” as the single for his upcoming album, Sada Baby shared a clip of his latest Hit-produced heat and also took a moment to big-up Big Sean while plugging the 20-some-odd unreleased records he and the “Racks In The Middle” producer have in the vault in an Instagram post on Monday (May 17).

“Out on All digital platforms Binko,” Sada began in the trademark stamped caption. “@bigsean x @hitboy proud to say me n Sean went from not knowing each other to being involved in each other’s personal lives and myself dealing with Hitboy went from genuine respect to having 20 plus songs on ice. Appreciate y’all boys 5ever #LittleWhile FMBIGSQUAD 55:50 Campanella SGE BSF MOBTIES DYD”

A post shared by Sada Baby The Red Whoop?? (@sadababy)

Last year, during an interview with HipHopDX, Sada Baby said he, Big Sean and Hit-Boy began cultivating their existing network as a result of working on the “Big Bank” rapper’s Billboard Chart-topping Detroit 2 album.

The “Whole Lotta Choppas” lyricist went on to reveal that a session weeks later in L.A. would bring the trio together once again, with the addition of A$AP Ferg, resulted in his involvement in Sean’s monster inter-city “Friday Night Cypher” freestyle featuring artist such as Kash Doll and Tee Grizzley  — despite tension among many of the Motor City artists featured on the record.

Stream “Little While” below.