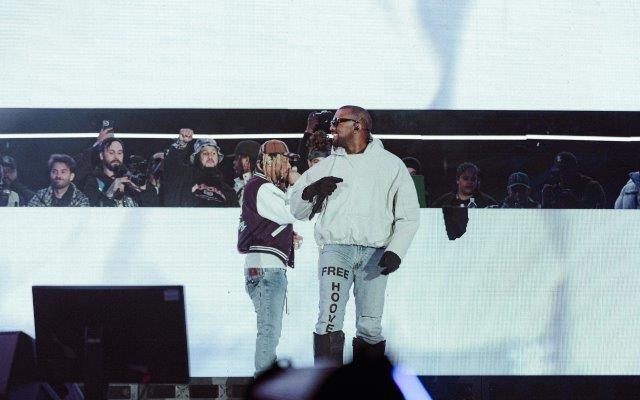 Kanye West’s Rolling Loud debut wasn’t the only thing special about the closing day in San Bernadino. Superstars like Playboi Carti and Don Toliver and rising legends like Polo G and Morray were also on hand for the day.

Ye arrived on stage following performances of hits like “March Madness” and “Mask Off,” blasting the crowd into another stratosphere with “Can’t Tell Me Nothing.” Ye’s act wasn’t just a cameo; he went on to perform “Hurricane” and “Praise God,” two songs from his smash album DONDA. While Future was pleased to sit back and watch Ye do his thing, he did contribute to the set by delivering his legendary “if Metro don’t trust you” ad-lib live during “Father Don’t Stretch My Hands” and singing “F*ck Up Some Commas,” which included an unplanned freestyle from Ye.

Ahead of the epic appearance, OhGeesy played solo and Shoreline Mafia tunes, urging the audience to yell “Free Greedo,” Drakeo said. The Ruler performed for the first time since his release from prison a year ago, Blueface joined DDG onstage to sing their song “Moonwalking In Calabasas,” and Offset Jim and ALLBLACK represented NorCal.

You can see the images from San Bernadino’s final day below.