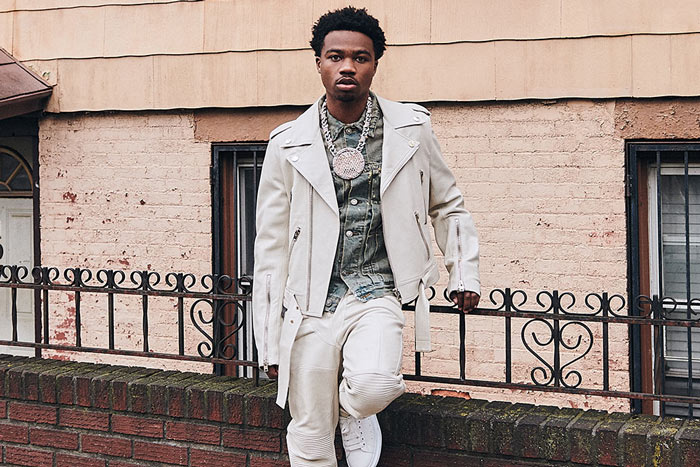 Roddy Ricch is on top of the charts and on the cover of Billboard.

Fresh off his first Grammy for Best Rap Performance for “Racks in the Middle,” his collaboration with Nipsey Hussle, the Compton rapper graces the magazine’s latest cover, where he discusses his success and journey.

“I always tell people where I grew up,” he says of his L.A. hometown. “I went to sleep to two things: a mariachi band for a quinceañera or gunshots. I never want to go back to that, and I never want the people around me ever to have to go through that continuously. It’s so much bigger than a trophy. It’s like, ‘Yeah, we won, but what did we really win?’”

How #YouTube helped Roddy Ricch and “The Box” rocket to No. 1 on the #Hot100: Read the cover story at the link in bio. — Photos: @jai.lennard Stylist: @bobbywesley Grooming: @taralauren

“The Box” has spent five weeks at No. 1 on the Billboard Hot 100, while his debut album Please Excuse Me for Being Antisocial topped the Billboard 200. Ricch is the No. 2 most-played artist on YouTube so far in 2020. And that’s even before an official video for “The Box,” which is on the way.

Ricch also sat down with Billboard as part of their “Fishing for Answers” segment, where he paid tribute to the late Kobe Bryant. “My favorite Kobe Bryant memory was when he scored 81 points in the game,” he recalled. “Me and my grandpa watched that game together so that was a crazy moment.”

He shared the inspiration behind “The Box,” which he recorded in NYC after knocking out eight or nine songs. “I made the song and then I put the little door noise at the end, after the song was done,” he said. “They thought it was finished, but I knew it wasn’t done. So, yeah. My inspiration was my life, I guess you could say.”

Plus, he revealed his favorite current L.A. rappers including Kendrick Lamar, YG, and himself.