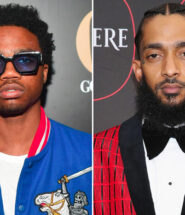 Roddy Ricch is keeping Nipsey Hussle close to his heart.

The “Box” rapper has revealed a brand new chain in memory of his late friend. Taking to Instagram Stories, Roddy showed off the memorial charm, which features a portrait of Nipsey surrounded by a diamond crown of thorns.

“I love you big bro @nipseyhussle,” Roddy captioned the photo.

The iced-out chain, which was made by celebrity jeweler Eliantte, rotates to display a photo of another one of Roddy’s late friends, JNew.

Crown Of Thorns Memorial Charm Made For @roddyricch RIP 🙏🏼

Roddy continues to honor the Crenshaw legend. The two won a Grammy for Best Rap Performance for their 2019 collaboration, “Racks in the Middle.”

“He was more than just another rapper to me. He was one of the young motivational role models in the city,” he told Rap-Up. “He really had a positive connection with young people. It wasn’t always about being the toughest or trying to prove yourself or be something you wasn’t. It was more so about being who you were and always having a strong mentality in whatever you wanted to do as far as your ventures.”

Earlier this year, Roddy teamed up with Meek Mill on their Nipsey tribute track “Letter to Nipsey.”

Roddy is currently in album mode, readying the follow-up to his 2019 debut Please Excuse Me for Being Antisocial. “The next album is going to be a full blown masterpiece. A real idea. A real body of work,” he told GQ.