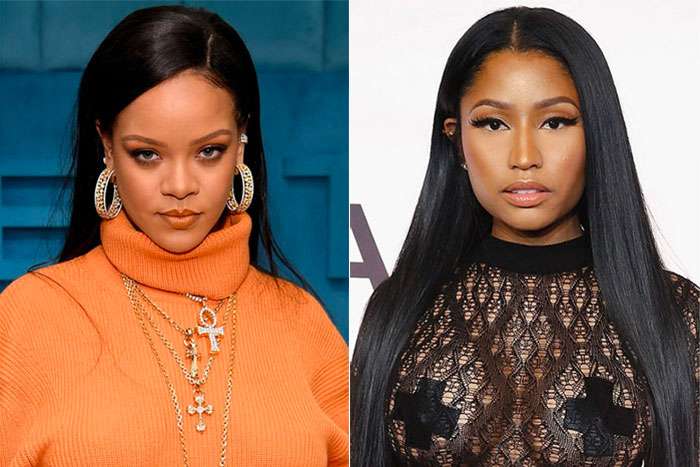 Rihanna and Nicki Minaj are using their platforms to speak out in support of protests against police brutality in Nigeria.

Nigerians have been protesting against the Special Anti-Robbery Squad (SARS), a unit of the Nigeria Police Force, after a video emerged of officers allegedly killing a man. The hashtag #EndSARS began trending worldwide as protests continue across the West African country. Nigerian President Muhammadu Buhari announced that SARS will be disbanded, but the violence has escalated in recent days.

Tonight Nigerian security forces stormed the most prominent site of the #EndSARS protests in Lagos, firing live rounds & killing several people as the government sought to end two weeks of marches against police brutality. Here's our report – and a thread: https://t.co/NPaZfSftpL

International celebrities including Kanye West, Big Sean, Trey Songz, and Lil Baby have taken to social media to voice their support for the #EndSARS campaign. On Tuesday, a heartbroken Rihanna reacted to the “torture and brutalization” in Nigeria.

“I can’t bare to see this torture and brutalization that is continuing to affect nations across our planet!” the singer wrote on social media. “It’s such a betrayal to the citizens, the very people put in place to protect are the ones we are most afraid of being murdered by!”

Added Rihanna, “My heart is broken for Nigeria man!! It is unbearable to watch! I’m so proud of your strength and not letting up on the fight for what’s right! #ENDSARS.”

Nicki Minaj has also joined the growing list of stars rallying around the #EndSARS movement. “Standing with & praying for the brave young people of Nigeria who are on the front lines of this senseless violence. Your voice is being heard. 🇳🇬 #EndSARS,” wrote the new mom.

Standing with & praying for the brave young people of Nigeria who are on the front lines of this senseless violence. Your voice is being heard. 🇳🇬 #EndSARS

Nigerian superstars including John Boyega, Davido, and Burna Boy have called for an end to the violence in Nigeria. Burna Boy encouraged his followers to sign a petition to implement sanctions against the Nigerian government and officials.

Implement sanctions against the Nigerian Government and officials – Petitions! We Need 100k signatures from UK Citizens for this to be tabled by parliament. Please Help is make our Killers pay. https://t.co/uoqTCBRI1Z

I stand with my Nigerian brothers and sisters to end police brutality, the government must answer to the peoples cries #EndPoliceBrutalityinNigeria

Police brutality here in America often is an abuse of power driven by race. To be brutalized, extorted and murdered by your own people is unimaginable. Prayers up and I’m researching ways I can help. #EndSARS

Nigeria!!! Y’all on my heart! It’s horrific over there! So many people being murdered for peaceful protesting about being murdered! #EndSARS

Too much blood has been shed this year at the hands of the ones who are “suppose” to protect us.. INTERNATIONALLY. In all of this evil please do not lose touch with God, heavy prayers 💔