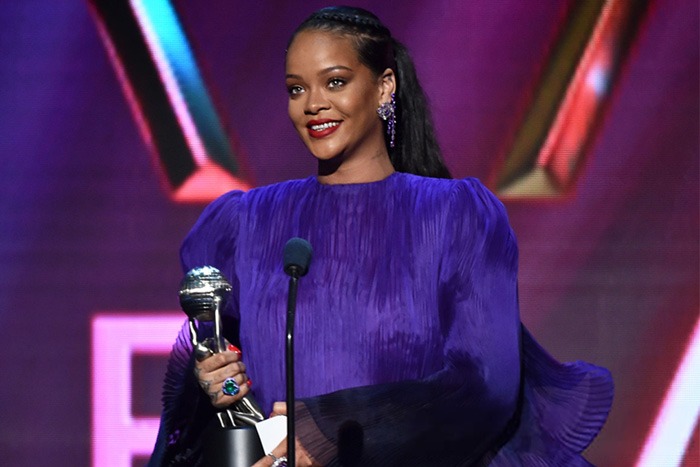 Rihanna was honored with the President’s Award at the NAACP Image Awards on Saturday.

Looking glamorous in a purple Givenchy gown, the 32-year-old singer, who celebrated her birthday earlier in the week, received a standing ovation as she accepted the award from NAACP President Derrick Johnson at the 51st annual ceremony, which was broadcast live on BET. During her moving speech, the music and fashion icon, entrepreneur, and philanthropist called for unity and equality.

Rihanna, who has raised millions as part of her philanthropic efforts, continued with some inspiring words. “I’m lucky I was able to start the Clara Lionel Foundation in 2012. And if there’s any thing that I’ve learned is that we can only fix this world together. We can’t do it divided. I cannot emphasize that enough. We can’t let the de-sensitivity seep in. The, ‘If it’s your problem, then it’s not mine; It’s a woman’s problem; It’s a black people problem; It’s a poor people problem.'”

As she looked into the crowd, which included Lizzo, Janelle Monáe, and Tracee Ellis Ross, she stressed the importance of people of all backgrounds coming together. “I mean, how many of us in this room have colleagues and partners and friends from other races, es, religions? Show of hands. Well, they want to break bread with you, right? They like you? Well, then this is their problem, too. So when we’re marching and protesting and posting about the Michael Brown Juniors and Atatiana Jeffersons of the World, tell your friends to pull up.”

She ended by thanking the NAACP and celebrating the strength of the black community. “Thank you to the NAACP for all of your efforts to ensure equality for our communities. Thank you for celebrating our strength and tenacity. We’ve been denied opportunities since the beginning of time. Still, we prevail. so I’m honored. Imagine what we can do together. Thank you for this honor.”

Jill Scott took to the stage to perform “Do You Remember” and “The Way” and H.E.R. delivered a medley of “Slide,” “Slow Down,” and “Turn Your Lights Down Low” with Skip Marley.