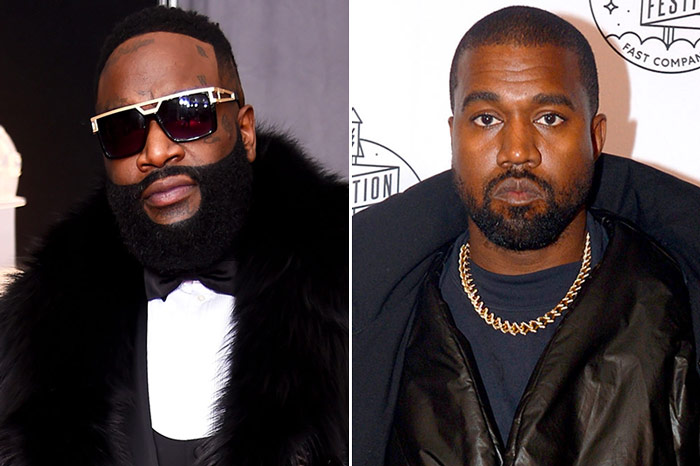 Rick Ross is giving Kanye West the benefit of the doubt.

Fresh off his Verzuz battle with 2 Chainz, the Maybach Music boss was asked what he thought of his frequent collaborator’s recent antics including his Twitter outbursts and political motives.

Ross revealed that he was approached about having a conversation with the presidential hopeful, but he missed the call because he was sleeping. However, he does eventually want to speak with Ye personally before jumping to any conclusions.

“I’ma speak to him personally. I got my own personal questions to ask homie because a lot of times you can catch the headlines and before you drop a homie on the head, you should just get that clarification,” he told “Ebro in the Morning.”

"Terry Crews Has Been Disrespectful To The Culture"@RickRoss shares his thoughts on Terry Crews, & having a conversation w/ Kanye West.

He did, however, stop short of approving Kanye’s recent behavior. “Obviously, me saying what Ye doing, it don’t get my approval,” he said. “But I’m responsible enough and have relationship enough with homie that when I speak to him, I pray homie give me that clarification.”

And if he found that Kanye wasn’t being genuine, he wouldn’t hesitate to cut ties. “But if he didn’t or if the motives was anyway ingenuine [sic], f**k him, drop him on his head too.”

He wasn’t as forgiving when it came to Terry Crews, who made divisive comments about racial equality in the wake of the Black Lives Matter movement. “When you a ass-kissing coon, you just a ass-kissing coon. We gon’ kick you in the ass and push you on the side,” said Rozay.

He also blasted the “America’s Got Talent” host on his new single “Pinned to the Cross.” “Terry Crews is another coon who was basically bought,” he raps.