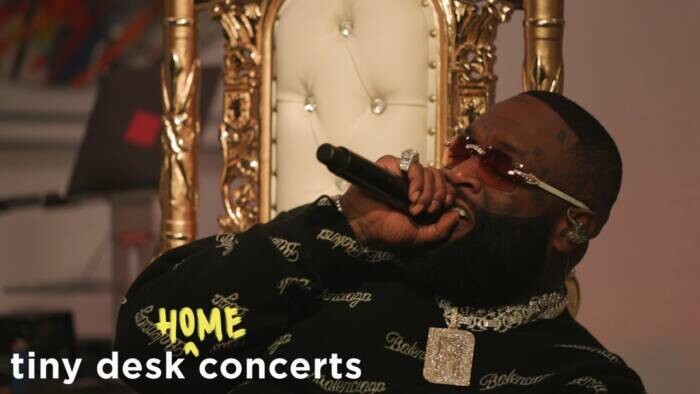 Rick Ross’ Tiny Desk takes place in the gallery space of Miami artist Rich B Caliente, The Boss’ longtime collaborator and friend. Even though the MIA street dignitary is now living in Atlanta, Ross insisted that his Tiny Desk (home) concert get captured in the city where his roots are anchored and where he rose to rap stardom. This Tiny Desk marks just the second time Ross has performed with a live band. On “Super High,” from his Teflon Don album, drummer Rashid Williams and bassist Thaddaeus Tribbett lay down the foundation for Ross’ smooth cadence and signature nonchalance. Background singer and Ne-Yo protege Troy Tyler projects the lead vocal lines originally sung by his mentor. Next, vocalist Elijah Blake steps up on Ross’ smash hit “B.M.F. (Blowin’ Money Fast) and “Aston Martin Music.” On the latter, Monty Reynolds drops in with the sparse, yet catchy key melody that made it the contagious hit single it was in 2010. At one point, Ross pauses between songs to speak on his inspirations. “So many inspired the Boss,” he says. “I could look at any brother on the street and get some inspiration from them, regardless of how many followers you got on social media, regardless of what you’re riding in. I could learn something from you. I ain’t scared to. Let’s make sure we keep building.” SET LIST “Super High” “B.M.F. (Blowin’ Money Fast)” “Aston Martin Music” “I’m Not A Star” “F*ckwithmeyouknowigotit” “Tears of Joy”