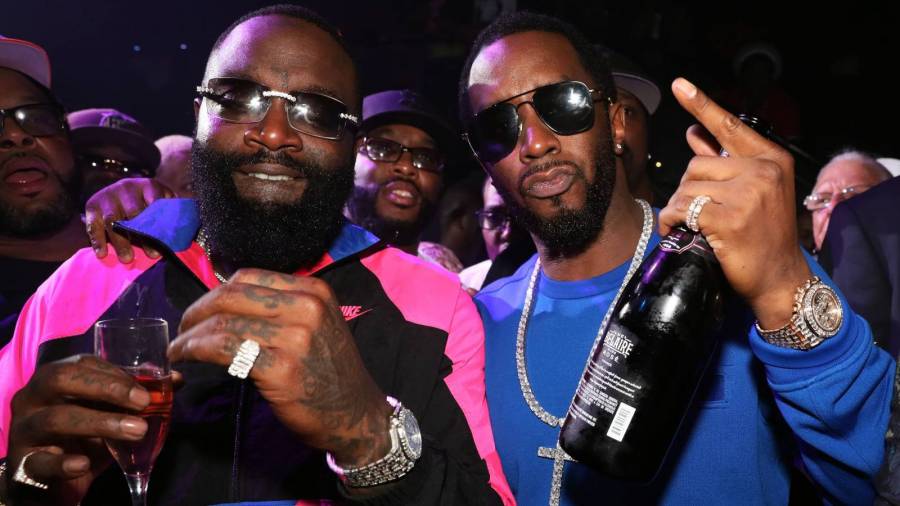 Atlanta, GA – Rick Ross has a sprawling, 109-room Atlanta estate that recently fetched $2.75 million from a movie studio to presumably use the home for the forthcoming Eddie Murphy film Coming To America 2. While Diddy is certainly no stranger to a lavish lifestyle, the Bad Boy Records mogul and one of Forbes‘ highest-paid celebrities was still blown away by a recent visit to Ross’ compound.

In an Instagram clip, Rozay refers to his home as the “promised land” as Diddy soaks it all in, marveling at his vintage car collection.

“I ain’t gonna lie, n-ggas be talking like they be getting money and like they have taste and they got style … well god damn,” he says in the clip. “When god made this n-gga here, whoo whoo! The boy cold. The boy cold. You gotta give it to him, man. Thank God God made a Rozay. Somebody had to do it. A Black man is doing this!”

Diddy is also shown riding in some kind of deluxe golf cart and he says, “I feel like I’m at Universal Studios! Yo! Drive me around, man … I could get used to this.”

He’s then taken to another part of the estate where he meets up with a few of Ross’ horses and talks about how “inspiring” Ross is. Toward the end of the clip, Diddy jokes he’s going to get Ross a giraffe for the property.

During a recent interview with Undisputed host Shannon Sharpe for his Club Shay Shay podcast, Ross talked about his sharp negotiations skills but didn’t directly mention the film by name.

“A lot of times, I don threw a number out there before, they moved a little slow and I went up on the number and they met me there,” Ross said. “I actually had a film, that was filmed at my estate, and I threw a number out there. I said, ‘This is a huge production this shouldn’t be that much. Hey, I understand what you guys need, that’s $2.5 M’s. Yeah, $2.5 million, yeah, most definitely, yeah that’s it.’”

According to Variety, Paramount Pictures sold Murphy’s movie to Amazon Studios in a deal worth a reported $125 million. Earlier this month, Ross bragged about charging a $20,000 fee just for filming crews to scout his property.

Ross will appear in Coming 2 America alongside Murphy, Arsenio Hall, Teyana Taylor, Rotimi and more. The film is expected to arrive on March 5. Until then, check out Ross’ Atlanta estate below.