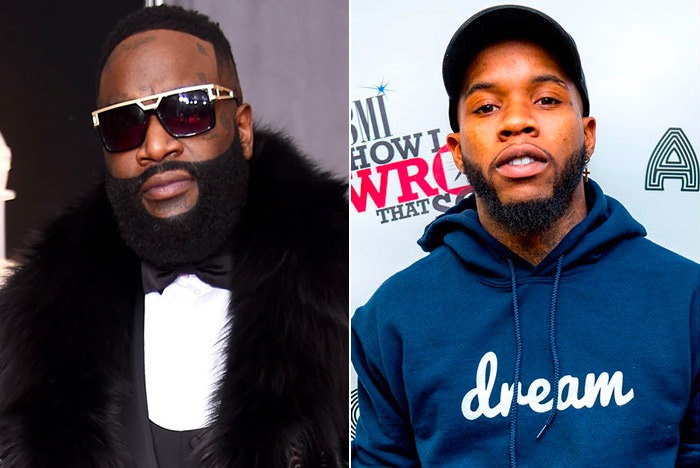 Just hours after the Toronto rapper released his new album DAYSTAR, on which he denies shooting Megan Thee Stallion, the Maybach Music mogul is putting him on blast. On his Instagram Stories, Rozay criticized Tory’s decision to release the project.

On Wednesday, a Kentucky grand jury decided not to indict three police officers for the shooting death of Taylor, a 26-year-old Black medical worker.

“We gotta respect these sisters. That ain’t how you address the accusations you facing with a sister,” he continued. “That was a poor choice, homie. You ain’t gettin’ no money with that shit.”

Ross also clowned Tory by showing off a white Smart car and saying he was gifting it to the 5’7″ rapper. “I got a gift for your album release, homie,” he said while filming the mini vehicle. “That’s you. Heard your shit just went double acrylic on DatPiff.”

Rick Ross claps back at Tory Lanez about Megan Thee Stallion and buys him a smart car pic.twitter.com/UDadtfSccP

While Tory did not mention Ross on his album, he did call out Kehlani, JoJo, Chance the Rapper, Asian Doll, DreamDoll, and J.R. Smith, among others.

“J.R. Smith, it’s the pot that piss / And you the last cat that should talk about some shots that hit,” Tory raps on “Sorry But I Had To…” “‘Cause your performance and percentage, player / Rollin’, ridin’ benches, ni**a, I’m from the trenches, ni**a / You the type to buy a chick a 80-inch and still won’t get a inch up in her.”

The Lakers star clapped back after hearing Tory’s diss track. “He not even 30 stay in ya place lil ass boy,” he said, adding, “Bust ya gun at a female you all types of [clown].”

UPDATE: Tory is firing back at Rick Ross. Taking to Twitter, he said he marched for “9 days strait for Breonna Taylor” and questioned Rozay’s activism. He also told him to stop using Breonna’s name in posts where he is also endorsing products. “It’s a poor decision,” said Tory.

I respect u 2 much as a black man to disrespect you in these times,however I went out and marched 9 DAYS STRAIT for Breonna Taylor ..IN YOUR CITY …I didn’t see the “boss” out there once ?…also stop tagging your endorsements in post about her . It’s a poor decision @RickRoss