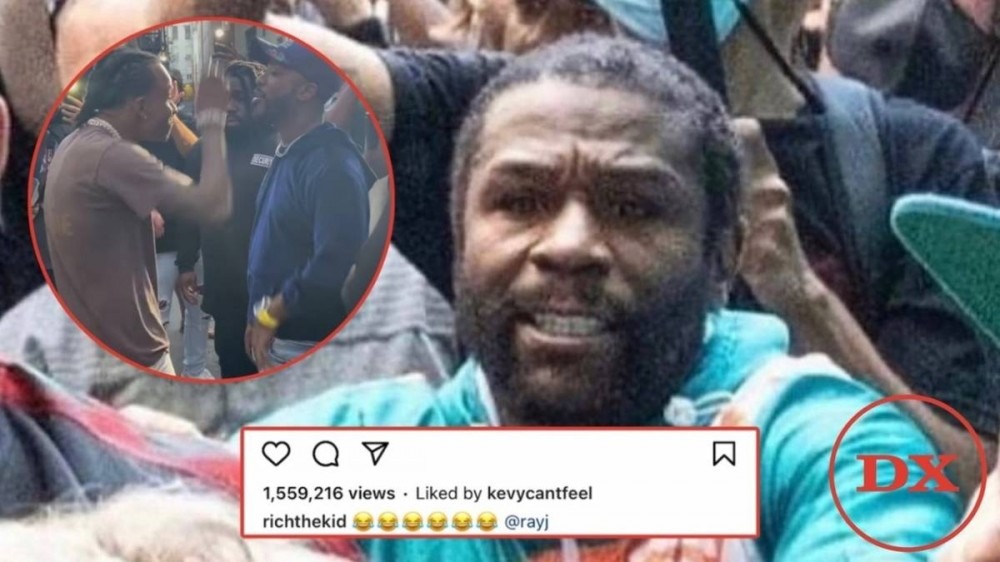 Rich The Kid and Ray J are all for the jokes following a heated encounter between Floyd Mayweather and YouTuber-turned-knockout-artist Jake Paul during a media event at Hard Rock Stadium in Miami ahead of Floyd’s exhibition bout with Jake’s brother Logan Paul.

The chaos ensued on Thursday (May 6), when Jake Paul confronted Floyd Mayweather and preceded to snatch his hat off his head in the moments after the world champion boxer’s media day with Logan Paul.

Floyd instantly becomes visibly agitated and goes after Jake as a small brawl engulfs the pair. TMZ captured video of the tense, physical showdown, vividly displaying Floyd’s unchecked rage during the encounter as he shouted, “I’ll kill you muthafucka,” incessantly at Jake Paul.

And even though the moment was all too serious for Logan and Jake Paul, as well as for Floyd — it didn’t stop Rich The Kid and Ray J for clowning them all for it.

In an IG video posted to Rich The Kid’s personal account, Ray J appears to be role playing as Floyd in a hoodie dad hat combo drawing parallels to Money Mayweather’s outfit in the original video.

The video quickly became a hit, accumulating well over a million views and attracting comments from jewelry designer Johnny Dang, Quavo and more.

50 Cent also got a hold of the clip of Floyd’s media day scuffle with the Paul’s and took a swift dig at the his arch rival with a screenshot of him enraged and hatless, obviopusly pursuing Jake to get his snapback.

“WTF going on, on champ head I heard he had his pubic hairs put on his face,” he wrote. “Lol.”

Floyd Mayweather and Logan Paul will enter the ring for their exhibition fight on Jun 6 in Miami.