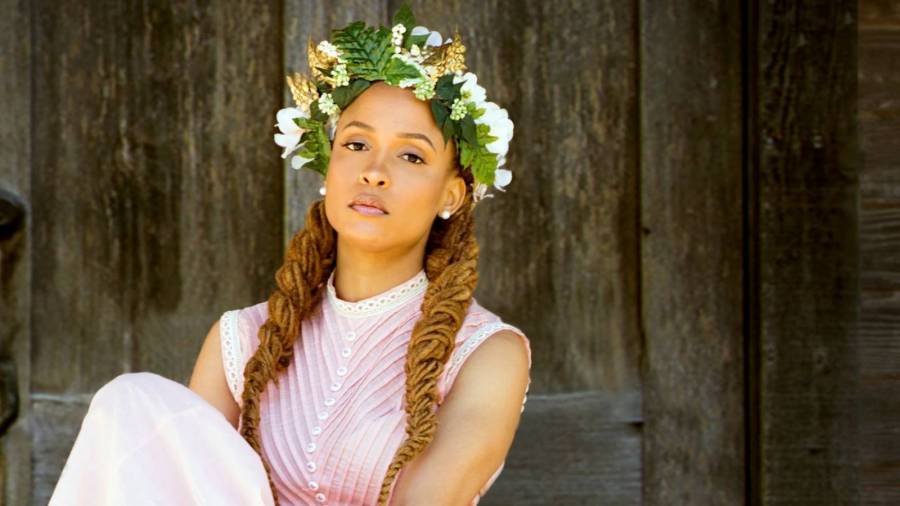 Interview – “Always listen to your gut,” Sa-Roc tells HipHopDX. “You never know where life is going to take you.” The Washington D.C. native was well on her way to a biology degree from Howard University with aspirations of being a veterinarian when she realized something didn’t feel right.

With her eyes set on the music mecca of Atlanta, the burgeoning artist dropped out of school and traveled the roughly 640 miles to the ATL. There, she linked with producer Sol Messiah and a music career started to unfold.

The 38-year-old MC didn’t start performing live until 2011 and three years later, her performance skills were put to the ultimate test when Black Thought pulled her up on stage during the A3C Hip Hop Festival.

“That was actually our first time meeting too,” Sa-Roc recalls. “We had a mutual friend who’s close to him and had been sharing music or whatever. He was anticipating meeting us there and Thought, being the Hip Hop icon who went through the fire and came up doing cyphers and freestyles, he completely believed in making sure an MC is up to par with going through that cold trial-by-fire thing.

“So, I didn’t know he was going to call me onstage. I thought it was just us meeting and that was it. I’m standing on the side of the stage and he says my name, and I’m like, ‘Oh my God, what is happening?’”

I have a crazy song with the God MC @blackthought from the legendary @theroots Crew on my new album The Sharecroppers daughter. Trust me, it’s not your typical feature though. We went Ham(vegan)! The title of the song is “Black Renaissance” produced by @solmessiah. 10/2/20

But as an MC, Sa-Roc knew she always had to come ready, so she confidently hopped up there and gave it all she had.

“If you get called as an MC on stage, unprepared or not, you better get prepared,” she says. “So I’m rushing through security, trying to tell them, ‘That’s me. I’m Sa-Roc!’ I get up there and do my thing.

“It’s funny, because when I first started performing my mic levels weren’t where they needed to be and I felt like the crowd couldn’t hear me so I was like, ‘Just cut the beat.’ I did that joint acapella and that was what got everybody’s attention, and the rest was history.”

It’s finally here! My new album, The Sharecropper’s Daughter is now available worldwide. It’s been such a long time coming and what a labor of love it’s been!  •I’m so incredibly grateful to share a bit of my journey with you, and I invite you to listen with your whole heart. •I pray that my own path to healing thru this work can inspire you to do the same.  •I am The Sharecropper’s Daughter.  •Fashioned of trauma and triumph. •Look at me now. #FULLMOONENERGY

Six years after that fateful night, Sa-Roc has become a commanding force in her own right and occupies a unique space when it comes to women who rap. It’s easy to look at the mainstream landscape and conclude there’s not a whole lot of diversity, but Sa-Roc is optimistic that’s something that could change.

When the topic of Cardi B and Megan Thee Stallion’s “WAP” single is brought up, she made it clear she’s never one to condemn another woman’s art, but she did make note of the timing of the song.

“There’s a lot of music out there that’s really not on brand for me,” she explains. “It’s [‘WAP’] not something I would necessarily listen to and that’s fine; everybody has their own personal taste. I just feel like there are certain things that get pushed for a reason. I feel like the timing of that was just so interesting. Right when all of the Breonna Taylor stuff was happening, right when the George Floyd protests and all of that were happening, and these cities were riddled in this conflict and at odds with police and buildings were burning in some places, and that comes out and the attention is diverted.

“I feel like it’s interesting there are artists who have songs that are actually speaking to things that are socially relevant and they don’t get the same promotion, they don’t get the same push as that song. I’m not judging the song one way or the other because, to me, I’ve already made my statement at the beginning. People make what they make. That’s the beauty of being an artist. You’re able to express yourself whatever way you see fit. But this lack of diversity within women in Hip Hop seems like a concerted effort to maintain.”

r(E)volution- an anthem of hope and resistance; the inevitable change that happens once we understand both our power and potential. NEW SINGLE OUT NOW! Link → bio. Produced by: @solmessiah 𝕿𝖍𝖊 𝕾𝖍𝖆𝖗𝖊𝖈𝖗𝖔𝖕𝖕𝖊𝖗’𝖘 𝕯𝖆𝖚𝖌𝖍𝖙𝖊𝖗 10/2/20

Sa-Roc also explained this perceived formula for success for female Hip Hop artists — which often relies on minimal clothing and a sexed-up image — puts pressure on them to conform.

“This is sensationalism though, and that’s reflected across all genres, right?” she continues. “It’s that whole sex sells idea. We’ve seen that reflected in Hollywood. It started to become harder for the independent art house films and one-off films that are more thoughtful or whatever. These films really don’t get the funding they need. People want these blockbuster hits. They want Fast and Furious 25 [laughs].

“So it’s not new, but I do understand they’ve set up this precedent that makes this formula for women in rap — this is what sells — and I feel like a lot of women are willing to conform to that for success, because it really is more difficult. It’s a more challenging road for women in general. Then, when it comes to Hip Hop, there are limited resources, limited access, limited visibility for us to be able to make our mark. For women who are like, ‘Whatever. I want to do my thing. I want to be an MC. I want to be popular,’ there’s more of a likelihood they’re going to be like, ‘OK, this is what I’m going to do. This is what sells.’”

In an interview with DX last month, Jermaine Dupri was asked about his controversial “strippers rapping” comment and insisted it was on the fans to make more conscious Hip Hop popular. Sa-Roc agrees — to a certain extent. Fans don’t have the luxuries a major record label does to be able to propel their favorite artists forward.

“With social media, there’s the ability for an artist to go viral with fan support,” she concedes. “But we have to understand a lot of this is programming through radio. When I used to go to work and turn on the radio, I would hear the same song over and over again. It’s not because of fan requests — they don’t be answering the phone like that. They’re playing it because they were given incentive by these companies to spin these records this many times. Even I would find myself singing along to songs that were not normally my cup of tea because they were programming that in my mind.

“We’re taught there’s varying levels of groupthink. When it becomes a cultural moment, a cultural movement, we get swept up in that. Then we say, ‘This is it. I kind of like this song.’ Whereas maybe two years ago, we wouldn’t have given it the same kind of energy. It’s just these moments are created and very cleverly cultivated by branding machines and industry machines. There’s something to that — the people supporting and it’s up to the fans — but we can’t play naive and act like there aren’t multi-million dollar, maybe billion dollar machines not planning this assault on the public.”

Sa-Roc’s brand of Hip Hop may be in a more niche realm, but she always has her finger on the pulse. She referenced the Tory Lanez shooting incident involving Megan Thee Stallion and applauded Cardi B for her political efforts.

“No knock on Cardi B or Megan Thee Stallion,” she continues. “I love how Cardi B has been using her voice and platform to talk about political issues and social justice issues. With everything that was happening with Megan Thee Stallion, too, I totally support her and her recent challenges. I felt like because she’s a woman, we see how women are unjustly treated and our tribe is silenced in favor of the popular man or whatever.

“I support them being vocal and standing up for themselves and speaking out about things they believe in. I don’t want it to seem like I’m tearing down another woman or whatever, because I’m not doing that. I’m all for it. I just want a diversity of expression. That’s all I’m saying.”

Throughout The Sharecropper’s Daughter album, Sa-Roc has no trouble telling her truth and expressing exactly who she is — a strong woman who has tackled adversity, stood up to her oppressors and emerged victorious. Whether it’s “Forever,” where she opens about struggling with her appearance in the past, or “Grounded,” where she finally makes peace with herself, the project proves once and for all just how comfortable she is in her own skin. No longer is she trying to fit some conventional form of beauty set for women eons ago.

“We be breaking our backs for these unrealistic expectations, especially when these societal standards are just based on falsehoods,” she says. “They’re based on airbrushed, manipulated images of people. You do you, but I don’t have to break my back trying to fit this ideal.”

The Sharecropper’s Daughter is currently available on all streaming platforms and the RSE website. A special album listening event goes down via Facebook on Friday (October 2) at 9 p.m. EST.