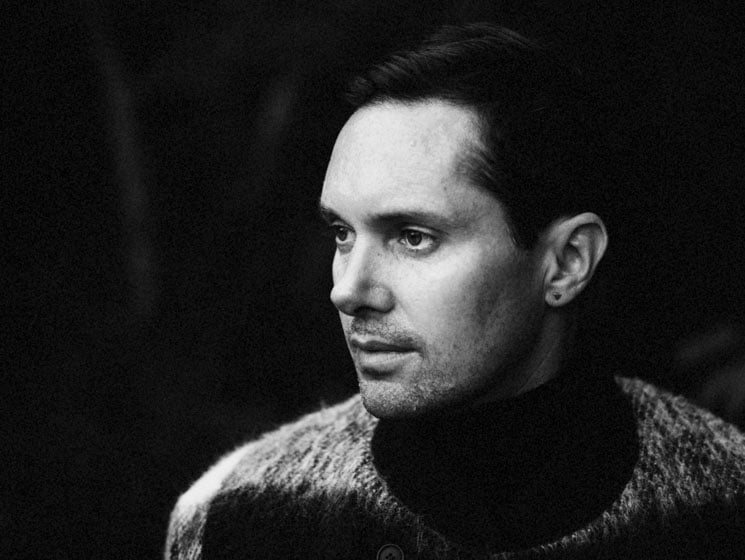 "Rhye is a black woman."

Mike Milosh is in Lisbon and finds himself engaged in small talk with a woman. He tells her he's in town, playing a show. She's like, 'Cool, what band?' Rhye, he says — he's the frontman. She calls Milosh a liar. He couldn't possibly possess the soulful, ethereal, intangible contralto Rhye is known for.

"She didn't believe that I was Rhye. She got mad and ran f to Google me," Milosh recalls. He saw her again soon after.

"I Googled you. Rhye is you. But I still don't think so," she said before storming f.


Issues identity have been the story Milosh's life thus far. Rhye was supposed to be a side project, yet now it's all-consuming for Milosh.  Milosh met Denmark's Robin Hannibal while on the same record label, and they decided to work together on music.

Milosh is careful in describing his relationship with Rhye's original collaborator; he's mindful to give credit, not too much, and graciously recognizes how Hannibal was able to help crystallize and codify the Rhye mystique. But Rhye is Milosh, Milosh is Rhye, and he is completely behind the creative reins at his juncture. "I just let people kind run with that," he says the common misconception Rhye's identity.

"Hannibal] made that first record with me," Milosh clarifies, "but he actually signed an exclusive deal with another label], and wasn't really allowed to even continue working with Rhye. And he's not a live musician, so he was never part the live show. I originally thought that Rhye was only going to play about ten to 15 shows, but we ended up playing like 450. So the project took another turn and became this live act. He's got his own stuff — he's a really busy guy —  and I think what happens is once a thing takes its own shape, it's gone in its own direction."

The initial mystery behind the band — who and what they were — was partly accidental, somewhat cultivated. Back in 2013, the surfacing breathy singles "The Fall" and "Open," an androgynous vocal and sensuous visuals stirred curiosity and invited comparison to R&B singer Sade. Debut album Woman was an underground hit that year, and Milosh and Hannibal were ultimately revealed as the soul-pop culprits behind the tease.

Vanity factored into it somewhat as well, Milosh notes, stemming back to his earlier days as a burgeoning electronic artist under his own name. "There are a couple factors in that. I remember one time I was stupidly reading internet comments, and people were commenting on the album cover for 2006 electronic album] Meme," he explains. "Someone posted that they loved my music, but hated my nose. And it really bothered me, like why does someone care about my nose?

"It kind made me feel insecure, I think. And at the same time I married this girl named Alexa, who I've since broken up with, but she had a lot problems with celebrity. I just started thinking that I don't really want to be someone that people recognize. I just want to make music — the cult celebrity thing wasn't important to me. We were signing with a major for the first time, and they are going on about the potential PR campaign and how big it was going to be. I realized that it maybe wasn't what I wanted. I didn't want to get wrapped up in that beast — it kind scared me, to be honest. I just didn't want to be in all these photos."

The mystery behind Rhye wasn't a master plan, he insists. "There was this speculation that I was a woman, which I didn't understand. I didn't feel like I needed to answer to it at the time; I knew that people were going to see me anyway, because I tour a lot," he says. "It was actually more coming from a secure place like 'I don't want to be in a] bright spotlight,' to the point where the first whole year shows, I was not even allowing the front light on stage."


Where Woman was intimacy, sheathed, new record Blood is naked and raw. Woman pondered the negative zone between love and longing; Blood traverses it.

For Milosh, emotionality is attained more strongly through music than in human interactions and events. "I think I'm mildly psychotic that way," he ponders. "I don't cry in real life very ten. If something's happened, I'm not crying in the moment, I'm just observing it. And then I think about it, and then I try to reflect in music, and then I start to get that choked-up crying feeling. It's almost like I can't feel unless it's through music. It's really weird," he says. "There've been shows that I've literally gotten the chills, to the point where I started crying. That is one the best feelings in my mind. Actually, in that moment, you're like, 'Wow, I'm a human being. I'm not a psychopath. I'm not a robot.' I'm feeling this crazy feeling from this music and it's one the most powerful things ever."

Recorded mostly in Los Angeles — in the same studio where legendary soul group Earth, Wind & Fire cut albums, he notes — Blood feels stippled with starkness, smouldering with intent, its recipe chamber-pop, soul and R&B on simmer. Much like the bulk Rhye's ethereal output, the album orients itself by way soul. While he worked with producer Thomas Bartlett, aka Doveman, on tracks like "Please," and King Henry for "Taste," Milosh was the primary producer on the project. "I'm very dominant, and in a studio session, in terms 'Oh my God, this is what we're doing.' It's a delicate balance, because I don't want to be a dick to anyone."

It's all within a wholly respectful context. "Bartlett, for example, when I play with him, he's really good at just listening to me sing. He's like, 'Oh my god, that was great.' I did this one line in the song 'Stly,' where I actually started to cry when I sang this word, and I had to stop the recording, and he just kept recording," he notes. "I want people to be the best, and get the best out them at the same time."

Buttressed by plucky orchestral sounds, the overarching timbre the sound feels rooted in rhythm and blues. Rhye is billed as such: alternative R&B, boudoir sounds for the Sade faithful. He acknowledges it, but believes it's much more.

"I don't have any weird negative biases against any genre — I see value in them all. But I'm not this crazy R&B head," he fers. "I don't have this massive R&B collection at home. I don't have the whole Stax catalogue memorized.

"I don't hear Rhye] as R&B," he explains. "There are things that I love about R&B that are in there — sounds that have informed things that I do, like vocal sounds. But I think there are also Gregorian chants in the melodic structures. My dad thinks a lot Rhye feels like straight-up Russia, that there are lot things on Blood that sound like Russian folk music.

"I love a lot electronic artists, particularly old Warp artists. But I also used to play a lot jazz and] blues and I did a lot live shows with the original members the Platters as a drummer and singing backup vocals back in the day. Plus classical music has always been in my blood. It's all music — you can borrow from every single methodology," he says. "I'm just a guy singing."


Milosh was born in Toronto Ukrainian parentage. His father was a trained violinist and Milosh has been immersed in the classical musical world since he could walk. "I started playing cello when I was three," he says. "I took to it really fast and my father noticed. I started playing with my dad's quartet and] ended up playing at the Royal Conservatory really young."

He'd be versed in his parents' culture as well, listening to Russian folk and taking lessons in Ukrainian dance. And being part the Canadian multiculture, listening to pop, rock, R&B, hip-hop and electronic sounds were a part growing up. Adolescence begat angst, disillusionment and the search for something more — typical teen stuff. He taught himself percussion and kicked f a high school band named Euphoric Trance.

"I had this moment just being disinterested with classical music for a while. We were doing stuff like battle the bands at high school. It was really 16-year-old stuff, but was really informative; it was when I decided that I wanted to play music forever."

After studying jazz and electro-acoustics at Montreal's Concordia University, it was f to Europe to find himself. He landed in Berlin and dropped a couple electronic albums, as Milosh, on the Plug Research label — 2004's You Make Me Feel and 2006's Meme. It was around 2010 when he connected with electronic producer Hannibal, who was on the same label, working on his Quadron project with vocalist Coco Karshoj.


"I've literally been bitten by a bear," he says casually. He proceeds to recall a litany events that would have felled lesser mortals: a breakup with former wife and muse; a violent encounter with an Los Angeles neighbour that left him concussed weeks before a European tour; the aforementioned bear incident; and another encounter, nearly attacked by wolves during a camping trip in Ontario.

There've been "a lot curveballs" during the last few years. Things that, in his words, could have been mildly devastating. But the fact he's still able to express feelings song feels right to him. "The first song on the record is called 'Waste,' and that's definitely a song reflecting the fact that we] broke up. I don't harbour any animosity towards us breaking up. That's just what happened. My life has gotten, like, you know, really beautiful and amazing. I'd almost recommend anyone that's having trouble in their life that they find music, a way to express emotions creatively where they can find beauty in their situation.

"Nothing is going to stop me from making music," he continues. Ultimately, Blood is his paean to human emotion, to existing, to feeling through music. "I think I'm at peace because I make music. I don't think I would be if I didn't," he says. "Music has the ability to make people empathize in a way that has meaning, that's really important. I don't think I'd be so ostentatious as to believe that I'm right about anything that I'm saying, but this is how I feel."

Blood is a personal statement, as all music should be. But larger success is always on the radar. "Mainstream success, I feel I would love to achieve mainstream success. That would be an amazing reality," he admits. "I could play a 20,000 person stadium — bring it on. I'll totally go for it, and I'm excited about it. But] I wouldn't dumb down the music I'm making to get there. So I don't know if that's the world that we live in."

On an intimate level, music is about catharsis; on a universal level, it's about survival. In Blood, it's about having the courage to be the version yourself that you want to be. "I hope that the music influences them in a positive way to be that person. To understand it's about respect for you, and for the people in your life," Milosh says. "It sounds super preachy, but it's something that's real. I'm not trying to cash in on something or trying to be clever. I'm just trying to be human."