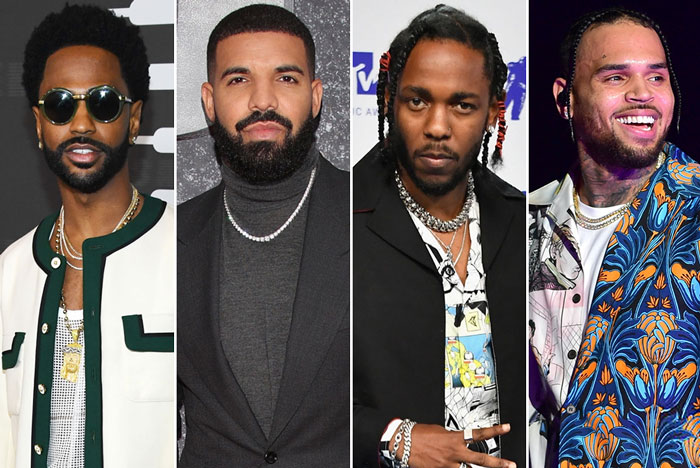 Big Sean is calling on some heavy-hitters for his next project.

A purported tracklisting and features for the Detroit rapper’s upcoming album has leaked. His Def Jam labelmate YK Osiris posted a photo of himself and Sean in the studio, while some keen-eyed fans noticed a whiteboard in the background with “Detroit II” written on it, the alleged title of his upcoming album.

While it’s hard to decipher all the text, HipHop-N-More was able to make out names including Drake, Kendrick Lamar, Young Thug, Future, and Lizzo. It’s unclear if these are confirmed or potential features for the project.

Big Sean is up to something 👀

‘Detroit II’ can be seen on the whiteboard with Kendrick Lamar, Drake, Young Thug, Future & more all listed.. pic.twitter.com/d8vBMW32CO

Sean first teased a sequel to his 2012 mixtape Detroit on “Overtime” in July. “I know your favorite one, dawg / I’m ’bout to drop the sequel / Ni**a, this just the preview,” he raps.

Sean, whose last solo project was 2017’s I Decided, is expected to release new music ahead of his upcoming performance at Coachella in April. In October, he previewed the project including collaborations with Post Malone, A$AP Rocky, and Meek Mill.

In honor of his 31st birthday last year, Sean opened up about his struggle with mental health and revealed that he’s been in the studio “making the best music of my life.” “I just been returning to my roots. I’ve just been getting back to having fun with it,” he told Beats 1. “I never really knew how important it was to take some time for myself and get myself right.”