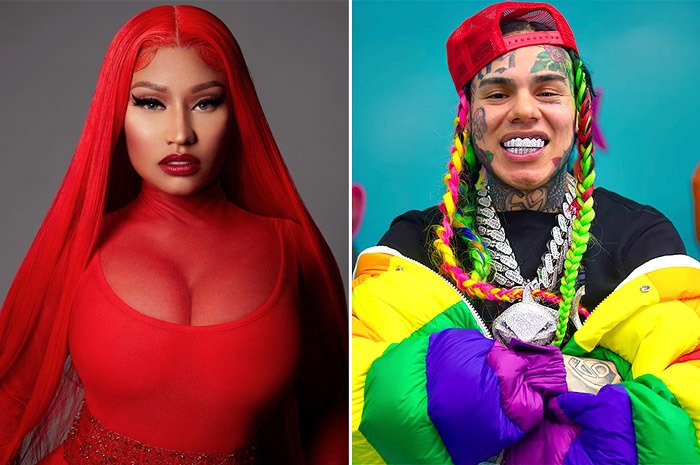 6ix9ine is calling on the Queen.

The “GOOBA” rapper has reportedly enlisted Nicki Minaj for his next single. Power 105.1 radio personality Honey German shared the news with her followers this week.

“I’m hearing that @6ix9ine has a new track with @NICKIMINAJ coming out soon – Let us wait,” she said in her tweet, which received a mixed response from fans.

I’m hearing that @6ix9ine has a new track with @NICKIMINAJ coming out soon – Let us wait ⏳#Tekashi6ix9ine #NickiMinaj pic.twitter.com/PPTj1ID57s

Neither Nicki nor 6ix9ine has confirmed the collaboration. 6ix9ine’s next single was supposed to drop this Friday, but was delayed until next Friday, May 29. “NEXT VIDEO WILL BREAK THE INTERNET IM PUSHING IT BACK TILL NEXT FRIDAY MAY 29TH,” he told his fans.

Akademiks also hinted that the song would feature a surprise guest. “This next song gonna be No. 1…wait till they see the surprise,” he wrote in the comments.

This wouldn’t be their first collaboration. 6ix9ine and Nicki previously linked up on “FEFE,” which peaked at No. 3 on the Billboard Hot 100, as well as the Kanye West-assisted “MAMA,” both off 6ix9ine’s debut album Dummy Boy.

Despite the controversy, Nicki has remained loyal to Tekashi in the past. Following his arrest in November 2018, she shared her support on Instagram. “Danny, I love you and am praying for you, your Mother, daughter & her Mom during this time,” wrote Nicki.

She even invited him to perform “FEFE” with her at the 2018 MTV Video Music Awards, but the “powers that be” vetoed the idea. “I wanted him to perform with me at the VMAs,” she said on Queen Radio. “I don’t want anyone to think for a second that I wouldn’t invite him to perform his hit record. I want everyone to know my character. I really fought.”

And while the world may have turned their back on him, she continued to vouch for her friend prior to his snitching. “When I know somebody there’s nothing you can tell me about him,” said Nicki. “That’s just how it is.”

6ix9ine released his first post-prison single “GOOBA” earlier this month. It debuted at No. 3 on the Hot 100, while the video has over 215 million views.