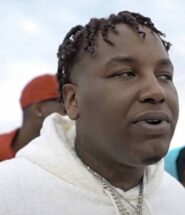 Mobile, AL – HoneyKomb Brazy’s grandparents were discovered deceased in a Mobile, Alabama house fire on Wednesday night (February 17) — but circumstances surrounding their deaths are suspicious. According to WKRG, emergency responders were dispatched to the Happy Hill community in north Mobile where the fatalities were discovered. The fire was so large it engulfed the house next door in flames as well.

A witness at the scene reports hearing gunshots just prior to the blaze, telling WKRG, “All I heard was a boom. It sounded like a bunch of shots. Lord have mercy. Don’t tell me they were up in there because Lord, I heard the children coming across the field crying. I pray for the Jones family. It’s just too crazy.”

HoneyKomb Brazy, a Rap-A-Lot artist, took his grief to Instagram shortly after the fire, confirming their deaths. He also insinuated he was somehow at the center of the incident.

“Long live grandma n grandpa y’all was my heart fr I put y’all in every song,” he wrote alongside a photo of his grandparents. “I hate y’all got caught up In my Shìt smh this Shìt hurt main I beg y’all to let me move y’all everyday but y’all Taught me how to be stand up guy y’all always told me If it’s our time it’s our time god got us.

HoneyKomb Brazy has been known to engage in some nefarious activities outside of rap. Last November, he found himself in the middle of a wild shootout.

In a clip posted by SayCheeseTV, a white Ford and dark blue sedan were parked side-by-side when shots rang out. HoneyKomb pulled out a firearm and started shooting back as his friends pulled out their weapons too. The driver of the white Ford eventually jumped out with another semi-automatic weapon and began shooting in the direction of perpetrators. The shooting continued for a few seconds before the video stops.

HipHopDX sends our condolences to HoneyKomb Brazy and his family.