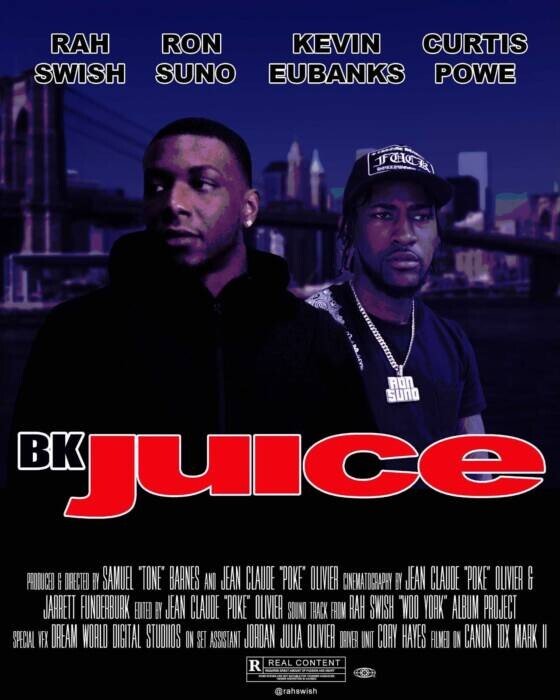 Enhancing its compelling and engrossing narrative, BK Juice features new music from Rah Swish’s upcoming project MAYOR OF THE STREETS, out next week. The follow-up to last year’s WOO Forever project, MAYOR OF THE STREETS finds Rah Swish projecting a supernatural aura of confidence with his nimble flows and energetic ad-libs. The project is home to recent singles like “WOO IT AGAIN,” “Woo Back,” and “Warm Ups,” as well as “HASHTAG RS” with Ron Suno, a standout track from the project that appears in BK Juice.

Born and raised on the same Canarsie streets that birthed his close friend and WOO associate Pop Smoke, Rah Swish is a prominent pillar of the city’s ascendant drill scene. Rah made a splash last year with his WOO Forever project, home to street hits like “Feel Like Pop,” “Tongue Out (Treeshin’ 2),” and “WOO Forever,“WOO Forever proved that Rah Swish is more than capable of keeping the WOO alive. The rapper turned heads later in the year with the Aaliyah-sampling “Watchu Like,” a sultry collaboration with Bronx rapper Dream Doll, racking up over 2.6 million YouTube views.

With the upcoming MAYOR OF THE STREETS, Rah Swish looks to solidify his status as NYC’s next up. Featuring an appearance from Smokepurpp and appearances from from fellow New Yorkers Ron Suno, Fetty Luciano, Leeky G Bando, and Young Costomado, and production from NYC legends the Trackmasters, along with local figures like Jbanga, Jetz, and more, MAYOR OF THE STREETS arrives on June 16th via WOO ENT. / EMPIRE